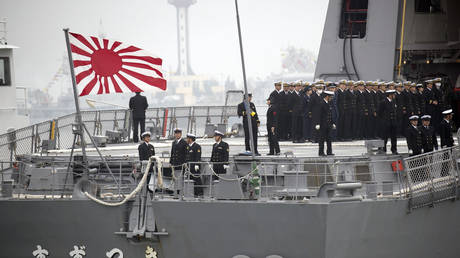 Sailors stand on deck of the Japanese destroyer Suzutsuki as it prepares to dock at a port in Qingdao in eastern China's Shandong Province, Sunday, April 21, 2019. ©  AP Photo / Mark Schiefelbein

The exercise will start in the south of Japan from May 11, marking the first time the three nations will have held a drill with ground troops, as tensions simmer with Beijing over activity in the East and South China Seas.

The announcement of the joint exercise was made by the Japanese Ground Self-Defense Force (JGSDF) and the defense minister on Friday, as the nation aims to strengthen its military cooperation with allies in the region. (RT)