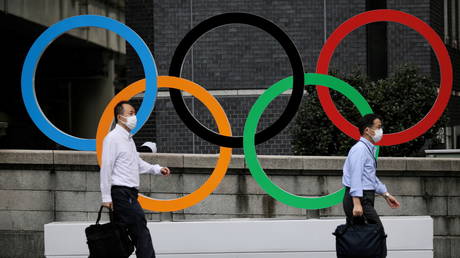 Men in masks walk past the Olympic Rings in the Tokyo business district of Nihonbashi during the Olympic games in Japan, August 4, 2021. ©  Reuters / Kevin Coombs

Japanese officials have agreed to tighten Covid-19 measures in eight more prefectures, with six already under full states of emergency, including this year’s Olympic host, Tokyo, which posted a record number of daily infections.

Japan’s pandemic response chief, Economy Minister Yasutoshi Nishimura, backed stepped up restrictions proposed during a meeting with experts on Thursday. While some of the experts suggested a nationwide emergency declaration due to the spike in cases, the minister said they ultimately agreed to expand restrictions in eight regions, for now.

“The number of infected people is increasing rapidly and by an order of magnitude which has never been experienced in many parts of the country,” Nishimura said at the meeting, according to Reuters and local media reports, adding that the situation at some hospitals has become “very severe.”

The prefectures in question include Fukushima, Ibaraki, Tochigi, Gunma, Shizuoka, Aichi, Shiga, and Kumamoto, several of which reported more than 200 new infections over the last day. Despite the relative surge in cases, however, daily deaths have remained low, with three of the regions reporting only one fatality each on Thursday, while the rest saw none. (RT)