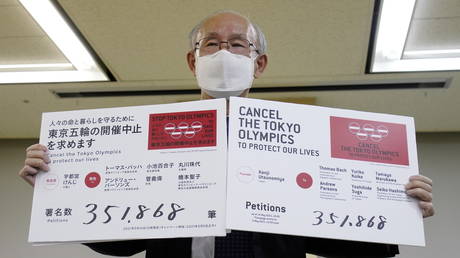 Lawyer Kenji Utsunomiya shows a petition calling for the Tokyo 2020 Olympics to be canceled, Tokyo, Japan May 14, 2021 ©  REUTERS / Naoki Ogura

Prime Minister Yoshihide Suga has announced a state of emergency will be extended to areas with infection spikes, as 350,000 people signed a petition for the Olympic Games – due to be held in Japan this summer – to be canceled.

From May 16 to 31, health curbs currently in place in areas including the capital will now be extended to Okayama, Hiroshima and Hokkaido, the location of the Olympic marathon.

This means nine prefectures in total will be under Japan’s third set of pandemic emergency measures by next week. Some cities in Gunma, Ishikawa and Kumamoto have their own restrictions in place.

Speaking on Friday, Suga said the population in the three areas going under the state of emergency “is relatively big and the number of new cases is very rapidly increasing.” (RT)