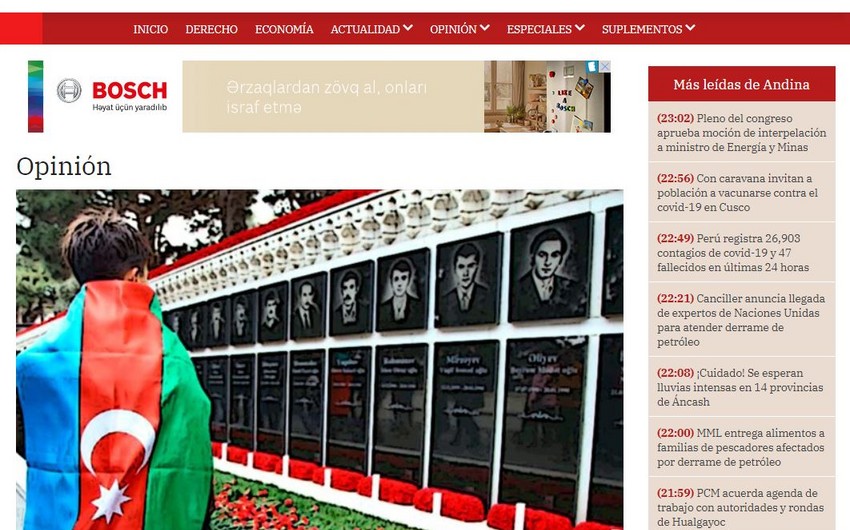 El Peruano, the oldest and most influential state newspaper of Peru, published an article by Azerbaijani Ambassador to Peru, Mammad Talibov, entitled “Solemnity of Freedom” on the 32nd anniversary of the January 20 tragedy, Report informs, citing the Azerbaijani Embassy in Mexico.

The article says that on January 20, 1990, which was engraved as one of the most tragic days and a chronicle of heroism in the history of modern Azerbaijan, the Soviet Union’s troops entered the capital Baku and other cities of the country and committed a brutal massacre of civilians in order to break the will of the Azerbaijani people and put an end to the liberation movement in the country, violating international law, as well as the constitutions of the former USSR and Azerbaijan SSR.

“The violence committed against our people during this military intervention, which was the last unsuccessful attempt to save the Soviet regime and killed 147 civilians, including the elderly, women and children, and seriously injured 744 people, is assessed as a collective punishment by international human rights organizations.

The Soviet military intervention did not dissuade the Azerbaijani people from their determined struggle for freedom, but seriously weakened the foundations of the Soviet regime in the country, and, in the end, in 1991, Azerbaijan regained its independence,” the article said.