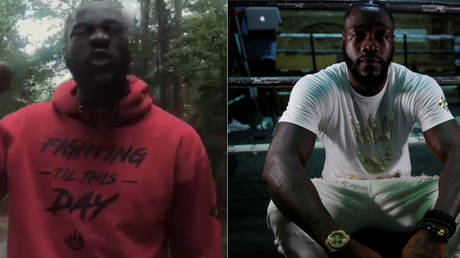 Heavyweight boxer Deontay Wilder has reprised his furious ‘Til This Day’ speech in a livid attack against racism, namechecking activist icons Malcolm X and Martin Luther King at the end of an incendiary week of protests in the US.

Wilder was clearly incensed during a minute-long diatribe about the political situation and protests that have engulfed the US since the death of George Floyd at the hands of police violence, raging that “400 years of slavery wasn’t enough” to bring about racial equality in his divided homeland.

Standing in the middle of a forest road wearing a red hoodie emblazoned with the “fighting ’til this day” slogan he made famous during pre-fight interviews, the dethroned champion ended months of near-silence in explosive fashion with an angry public announcement about the state of the world.

“From the womb, as black man we were born to be tough,” he told his millions of followers on social media. “[Being] lynched, whipped [and] burned was a thing of the past but ‘til this day – jail, rape, gun, how long will it last?”

The Bronze Bomber namechecked a succeession of key figures from black history, booming: “As if Malcolm X and MLK wasn’t a must. Eric Garner, Breonna Taylor, Trayvon Martin all died from just being us.

“Dark like molasses, black like the night. United we stand, together we fight. Fighting for Ahmaud Arbery and all of the others. Tell me, why y’all killing our sisters and brothers ‘til this day?”

Wilder’s impassioned views made headlines in the build-up to his resounding defeat against WBC challenger Tyson Fury in February, when he argued that African-Americans had been “fighting ’til this day” to end discrimination across the centuries.

Also on rt.com ‘I can teach him how to win’: Floyd Mayweather offers to help Deontay Wilder exact revenge in Tyson Fury trilogy fight

“I don’t remember a time when none of my people did anything to you people, other than work hard and try to be equal,” he pointed out in his latest tirade. “Now y’all mad at protests and riots? We showed you nothing but peace. We’re done being quiet.”

Wilder contextualized those views by adding on Twitter that his words described “blacks vs racism” rather than “blacks vs whites”.

The giant Alabaman has stayed largely quiet since being roundly ridiculed for blaming his ringwalk costume for his emphatic loss to Fury in Nevada in February, although he enforced a contractual option of a rematch against the Englishman, who he shared a dramatic draw with in Los Angeles in 2018.

Their third meeting had been due to take place this summer before being postponed amid the COVID-19 pandemic. China, Australia and NFL stadiums are now rumored to be in the running to stage the trilogy fight. (RT)