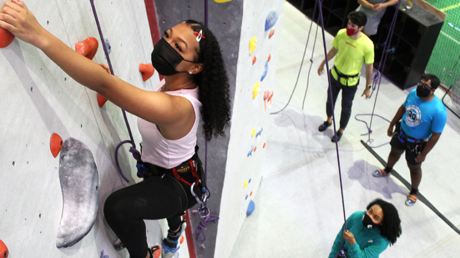 After prompting fierce backlash and accusations of promoting “racial segregation,” a rock-climbing course geared exclusively towards ethnic minorities at Cornell University in New York has now opened enrolment to all students.

While the course, titled PE 1641: BIPOC Rock Climbing, retains a “special focus” on enabling black, indigenous, Latin, Asian, or other people of color (BIPOC) to learn the sport, white students are no longer barred from enrolling in the $315 physical education class.

Previously, the course was only open to students identifying as BIPOC.

For months, it sparked heated online debate. On Reddit, a topic titled “End Racially Segregated PE Classes at Cornell” saw a number of concerns and criticisms raised that related to the “deliberate exclusion of students on the basis of their race.”

As the story gained traction in national media, the university initially pushed back against the furore.

“While some [activities] may include a focus on students with specific identities, they are not restricted to only those students. Cornell offers many programs that support interests and perspectives of different parts of our community,” university spokesperson John Carberry told the Cornell Daily Sun student-run newspaper in an article published on Tuesday.

Also on rt.com A new film explores the stereotype that ‘black people don’t swim,’ but in my experience it’s more than a stereotype, it’s a truth

However, the course instructors told the publication it was “highly unlikely” that students who do “not consider themselves BIPOC” would enroll. They pointed to issues of “inaccessibility for minorities in this white-centric sport” that is “affected by racism, sexism and sizeism.”

The article also quoted a number of students explaining that the course’s BIPOC aspect made it a “safe space” where participation was “more comfortable, accessible and encouraging in an unfamiliar environment.”

Read more:   Microsoft in trouble after revelation unvetted Chinese contractors listened in on Skype calls with NO security

One student said that the focus ought to be “less on why segregation exists and more on why there’s a need to segregate.”

Claiming that being a minority at a “predominantly white institution” created a feeling of isolation, another student said, “Hearing people complain about this class, saying it’s taking away from our white peers is laughable and frustrating.”

However, according to the most recent data available from the National Center for Education Statistics, white students accounted for just 36% of the university’s over 15,000-strong undergraduate cohort in the fall of 2019.

Despite the open enrolment policy, a number of users on social media claimed the course “is still racist.” Others wondered how it could be in compliance with Title VI of the Civil Rights Act (1964) – which protects against exclusion and discrimination based on race, color or national origin in activities that receive Federal financial assistance. (RT)