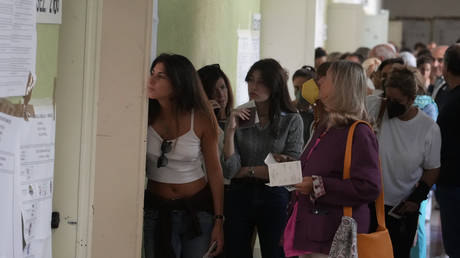 The right-wingers are expected to win the most votes Voters at a polling station in Rome, September 25, 2022. © AP Photo / Gregorio Borgia

Italians are going to the polls to cast their ballots for members of parliament in a snap election on Sunday, with conservative parties favored to make the biggest gains.

The coalition, which was formed in February 2021, broke down due to disagreements over Covid-19 recovery plans and programs to tackle inflation and rising energy prices.

According to polls released before the pre-election ban on September 10, the right-wing Brothers of Italy (FI) party, a former outsider, is now poised to come in first with 24%, which could be the biggest victory since its founding ten years ago. In a message to voters on Friday, FI leader Giorgia Meloni said the party “has never betrayed its word and has always put Italians first.” 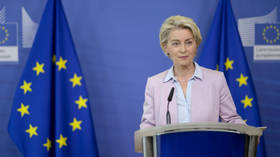 The left-wing Democratic Party polled at 23%, while the League and M5S each polled at 13.4%, and former Prime Minister Silvio Berlusconi’s Forza Italia at 8%. Meloni, Berlusconi, and League leader Matteo Salvini held a joint rally in Rome together on Friday, demonstrating that they are ready to form a coalition should they win.

European Commission head Ursula von der Leyen rattled some conservatives on Thursday by saying Brussels has “tools” to respond if the political situation in Italy goes in a “difficult direction” after Sunday’s vote. She was apparently referring to the EU’s ability to withhold funding to member states that violate the bloc’s laws.

Salvini, nevertheless, warned von der Leyen against meddling in Italy’s domestic affairs. “It’s an attack on democracy, and, above all, blackmail,” he said.

It is the first election after Italy decreased the number of seats in the Chamber of Deputies and the Senate, from 630 and 315 to 400 and 200 respectively. The voting age for the Senate has been lowered from 25 to 18. (RT)