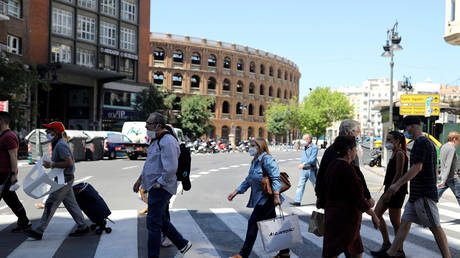 The European Commission has finally put forward its plans for post-pandemic economic recovery and is set to propose that hardest-hit Italy and Spain will receive the biggest chunks of the €750 billion set aside.

The Commission said the package of measures would be worth €1.85 trillion in total “to help kick-start” the economy and “ensure Europe bounces forward.”

Out of the €750 billion ‘Next Generation EU’ recovery fund, Italy could get 173 billion, while Spain could get 140 billion — and the fund will be offered in a combination of grants and loans, a senior EU official told Reuters.

Also on rt.com Soros says EU may not survive unless it props up ‘sick man of Europe’ Italy

Italian PM Guiseppe Conte welcomed the “excellent signal” from Brussels, tweeting that the €750 billion was an “adequate” figure. “Now let’s speed up the negotiation and free up resources soon,” he wrote. French President Emmanuel Macron also said the bloc must “proceed quickly” with the recovery plans. (RT)