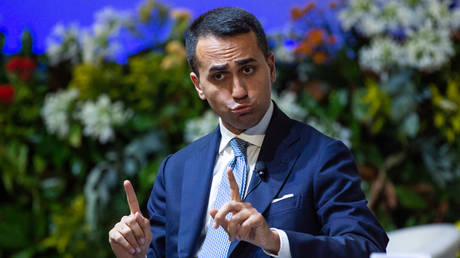 On Thursday, Di Maio slammed what he called the “interference of the Russian government in the Italian elections,” describing it as “truly worrying.” He said Medvedev had given a “clear instruction on how to vote” and called on Italian political forces to “distance themselves from Russian propaganda.”

The foreign minister’s statement came hours after Medvedev, now deputy chair of Russia’s Security Council, published a post on his Telegram channel calling on Europeans to make their dissatisfaction with their “moronic” leaders known in the voting booth.

Citing unspecified polls, Medvedev said Europeans “have not lost common sense” and “more than half” of them are against breaking off ties with Russia. Europeans want normal relations, energy in their homes, markets for their products, successful trade and tourists in museums and cafes, he argued.

Medvedev also called on Europeans to punish and “call to account” their politicians for their “obvious stupidity.” He added that Europeans do not want to be asked to pay out of their own pockets to punish Russia, which “hasn’t harmed any EU citizen in any way with its operation in Ukraine.”

“Take action, European neighbors! Don’t keep silent!” the former president urged, concluding the post with a warning that “in the winter, it’s much warmer and comfortable in Russia’s company.”

Di Maio assured Italians that the government in Rome is working to “diversify the sources of our gas supplies” to become less dependent on Russia, which he said was “funding the bloody war in Ukraine” with Italian money. (RT)