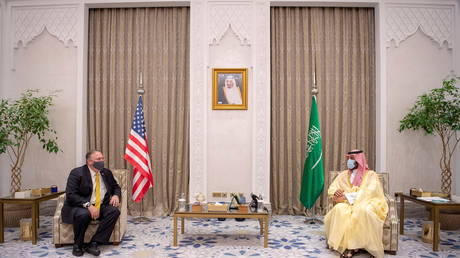 Riyadh has denied claims that the Israeli PM became the first leader of the Jewish state to meet Saudi officials at the weekend through secret engagement with Mohammed bin Salman (MBS). Benjamin Netanyahu has refused to comment.

An Israeli minister said on Monday that Netanyahu had jetted into the new Saudi Red Sea city of Neom for talks with the Crown Prince and US Secretary of State Mike Pompeo, who the Israeli PM hosted in Jerusalem last week as part of the US politician’s tour of the Middle East.

“No such meeting occurred,” he tweeted. “The only officials present were American and Saudi.”

I have seen press reports about a purported meeting between HRH the Crown Prince and Israeli officials during the recent visit by @SecPompeo. No such meeting occurred. The only officials present were American and Saudi.

Earlier, Israeli Minister of Education Yoav Galant had hailed Netanyahu’s meeting with MBS and Pompeo as an “amazing achievement.”

“The very fact the meeting happened, and was outed publicly, even if half-officially right now, is a matter of great importance,” he told Israel’s Army Radio.

Flight-tracking data showed that a private jet previously used by Netanyahu for international visits flew from Tel Aviv to Neom on Sunday night and was on the ground for about two hours, Israeli daily Haaretz reported. (RT)

At least eight people died after gelatin sticks loaded on a truck exploded near Hunsodu,…