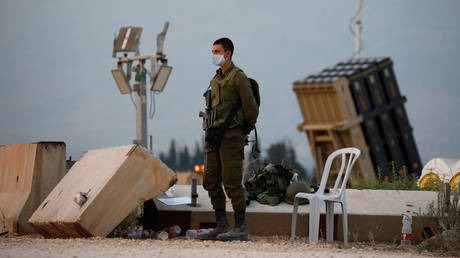 An Israeli soldier stands guard next to an Iron Dome anti-missile system near the Israel's northern border with Lebanon July 27, 2020. ©  REUTERS/Amir Cohen

Israel has launched a probe to determine why its air defenses were not able to shoot down a Syrian missile that landed in the country near a nuclear reactor, prompting a retaliatory strike from the IDF.

The Israel Defense Forces (IDF) claimed that a long-range SA-5 surface-to-air missile was launched from the direction of Syria toward Israeli fighter jets that were reportedly carrying out airstrikes in the Syrian Golan. The missile exploded in a village just a few miles from Dimona, the Negev desert town where Israel’s nuclear reactor is located, on Thursday morning.

The IDF said that it does not believe that the nuclear site was specifically targeted and that the missile was not meant to strike any particular site on the ground. The projectile did not result in any injuries or serious damage. (RT)