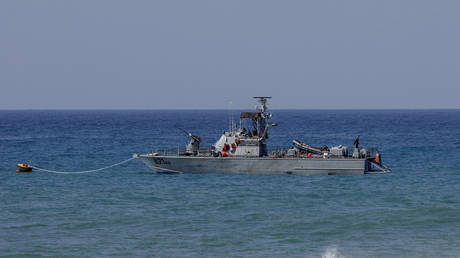 An Israeli Navy vessel is moored in Mediterranean waters off Israel's crossing at Rosh Hanikra, known in Lebanon as Ras al-Naqura, at the border between the two coutries, on October 4, 2022. ©  JALAA MAREY / AFP

With elections looming, the government has rejected Beirut’s amendments to a US-brokered border agreement An Israeli Navy vessel is moored in Mediterranean waters off Israel’s crossing at Rosh Hanikra, known in Lebanon as Ras al-Naqura, at the border between the two coutries, on October 4, 2022. © JALAA MAREY / AFP

Israeli Defense Minister Benny Gantz ordered troops near the border with Lebanon into high readiness on Thursday, amid reports that the country has rejected Beirut’s amendments to a US-proposed border compromise. The maritime border dispute involves natural gas fields both neighbors seek to exploit.

After consultations with the general staff, Gantz ordered the Israel Defense Forces to “prepare for any scenario in which tensions increase in the northern arena – including defense and offense readiness,” according to the Jerusalem Post.

The order was an indirect confirmation of reports earlier in the day that Israel had rejected Lebanon’s amendments to the agreement, drafted by US envoy Amos Hochstein and presented to both sides last weekend.

According to Al Jazeera, Hochstein’s draft received a “mostly warm preliminary reception” from both sides. Lebanon presented its response on Tuesday, but on Thursday Israel rejected those modifications. While the deal has not been made public, Israeli media said it would have allowed the country to freely explore the Karish gas field.

The main issue appears to be Lebanon’s reluctance to accept an Israeli-demarcated “buoy line” as a de facto international border, given the two countries are technically still at war. 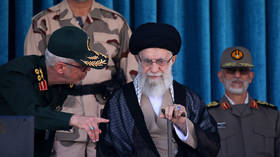 Iran blames US and Israel for riots

Hochstein’s original proposal was welcomed by Hezbollah and described as “on the right track to assert Lebanon’s rights over all its waters” by Lebanese PM Najib Mikati earlier this week. Beirut is reportedly still waiting for Israel’s official response to the amendments.

Gantz also argued in favor of the deal, saying it would “harm Iran” and Hezbollah. However, former PM Benjamin Netanyahu called it a “surrender agreement” and insisted Israel needs “different leadership.” Israeli elections – the fifth in four years – are scheduled for November 1.

Beirut and Jerusalem are disputing a maritime area approximately 860 square kilometers in size, believed to be rich in oil and natural gas. Negotiations have been ongoing since 2020, complicated by the fact Israel and Lebanon have no official diplomatic relations. (RT)