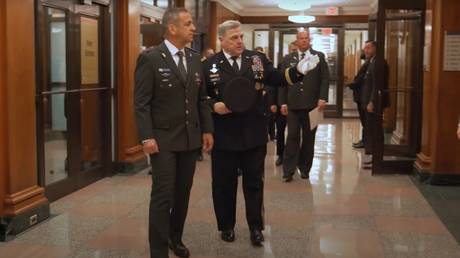 Chief of Staff of the Israel Defense Forces Aviv Kochavi (L) meets with US Chairman of the Joint Chiefs of Staff Mark Milley at the Pentagon in Washington, DC, November 21, 2022. ©  IDF

Israel’s military chief warned US officials that Tehran could soon obtain nuclear weapons Chief of Staff of the Israel Defense Forces Aviv Kochavi (L) meets with US Chairman of the Joint Chiefs of Staff Mark Milley at the Pentagon in Washington, DC, November 21, 2022. © IDF

Israel Defense Forces (IDF) Chief of Staff Aviv Kochavi has called on the United States to develop new “operational plans” to take on the Iranian military, urging top US defense and intelligence officials to “accelerate” joint efforts to counter the Islamic Republic.

Kochavi held a series of meetings with Chairman of the Joint Chiefs of Staff Mark Milley, National Security Advisor Jake Sullivan and CIA Director William Burns, the IDF said in a press release on Tuesday, noting that he discussed the “Iranian threat” with each of the officials he spoke with since landing in the US on Sunday morning.

“We are at a critical point in time which requires the acceleration of the operational plans and the cooperation against Iran and its proxies in the region,” Kochavi said after the meetings. “On the one hand, Iran is under many economic, military and internal pressures, and on the other hand continues to advance the nuclear project.”

During his sit-down with General Milley, the two officials discussed “strengthening cooperation between the [US and Israeli] armies against threats in the region, chief among them the Iranian nuclear threat,” according to the IDF. Sullivan, too, said the White House would carry out its pledge to “prevent Iran from acquiring nuclear weapons.” 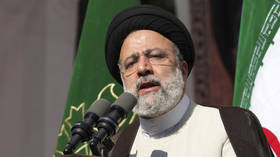 While Israel has offered little evidence supporting the existence of an Iranian nuclear weapons program, officials have claimed for decades that Tehran is on the cusp of developing its own bomb. The Islamic Republic has denied any plans to build nuclear weapons – with Supreme Leader Ayatollah Ali Khamenei issuing a fatwa (religious decree) against all weapons of mass destruction in 2003 – and passed numerous inspections by the UN’s nuclear watchdog under a major deal signed with world powers in 2015.

However, after Washington unilaterally withdrew from the nuclear deal under President Donald Trump, Tehran has steadily scaled back its compliance, boosting its enrichment of uranium and building new advanced centrifuges while demanding an end to US sanctions. Iran has nonetheless insisted that such steps do not indicate it is seeking a nuclear weapon, despite continued allegations from the United States and Israel. (RT)

Foreign travelers’ trip to the Azerbaijani lands, liberated from the Armenian occupation, has kicked off.…