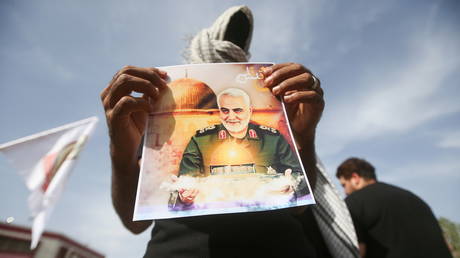 FILE PHOTO: A member of the paramilitary Popular Mobilisation Forces (PMF) holds a picture of Qassem Soleimani, during a parade marking the annual Quds Day, or Jerusalem Day, in Basra, Iraq, May 7, 2021 © Reuters / Essam al-Sudani

Israel went to great lengths to distance itself from the drone assassination of Qassem Soleimani last year. However, a new report on the planning and execution of the Iranian General hit claims that Israel was involved.

Soleimani, who commanded the Iranian Revolutionary Guards Corps’ Quds Force, was wiped out by an American drone near Baghdad Airport last January. His killing brought the US and Iran closer to open war than at any time in recent years, and according to a Yahoo News article published on Saturday, was in the planning stages since the earliest days of the Trump administration.

Based on “interviews with 15 current and former US officials,” the article pieces together the effort to “take Qassem Soleimani off the board,” in the words of one anonymous CIA official. Multiple US military branches and intelligence agencies were involved, but so too were Israeli special forces, the article claims.

Also on rt.com ‘Israel is not a country, but a terrorist camp,’ Iran’s leader Khamenei says

In the runup to the strike, US Joint Special Operations Command personnel traveled to Tel Aviv, where they “worked with their Israeli counterparts to help track Soleimani’s cellphone patterns.” Soleimani reportedly switched phones several times in the hours before the attack, but the Israelis knew his numbers, and “passed them off to the Americans.”

It is unclear which Israeli unit or units had Soleimani’s details. All the article reveals is that they were “counterparts” of US special forces. (RT)