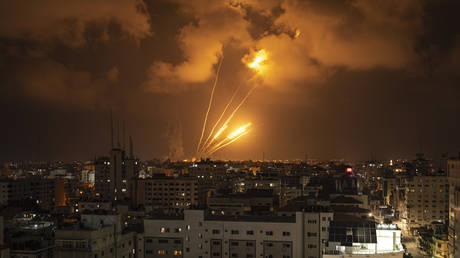 The death toll in the Gaza Strip amid Israel’s ongoing ‘Operation Breaking Dawn’ has grown to 24, including six children, with over 200 people wounded as of Saturday night, according to Palestinian health officials. The Israeli military accuses the Palestinian Islamic Jihad (PIJ) militants of using civilians as “human shields” and killing own people in botched rocket attacks.

The Israel Defense Forces (IDF) confirmed striking multiple “terrorist targets” across the Gaza Strip on Saturday, but denied any responsibility for a deadly blast in Jabalia refugee camp in the north of the enclave that reportedly killed at least six people, including three children.

Read more:   US will seek to facilitate evacuation, push for 'inclusivity' in 1st face-to-face talks with Taliban since pullout – media

“Following the reports of the tragic events in Jabaliya, the IDF concluded an in-depth debrief. Based on all the IDF systems data, it appears that this event is the outcome of an Islamic Jihad rocket misfire,” the IDF said in a tweet on Saturday night, adding it “did not conduct any activities in Jabaliya at the time of the event.”

The Israeli military said their radar data can “prove beyond any doubt that this is not an Israeli attack.” A video of the alleged failed launch circulated on social media and was aired by Israeli TV stations, but its authenticity could not be immediately confirmed.