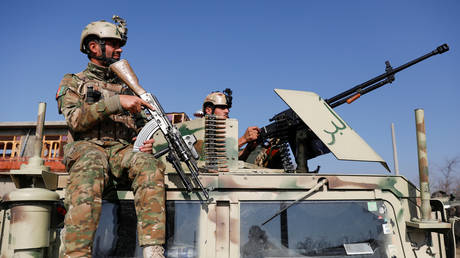 FILE PHOTO. Afghan security forces inspect the site of an attack in a US military air base in Bagram. ©REUTERS / Mohammad Ismail

The terrorist group Islamic State has claimed responsibility for shelling a US military base near Kabul. There were no casualties reported in the incident, but the attack comes amid a sensitive prisoner exchange with the Taliban.

Rockets were fired on Thursday morning from a vehicle parked in the nearby Qalacha area, a spokesman for the Afghan interior ministry said. The car burned out in the aftermath.

Purported photos of the launch site showed a five-projectile rack hidden inside the luggage compartment of a charred car. (RT)