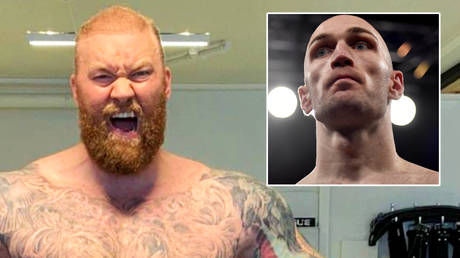 Icelandic hulk Hafthor Julius Bjornsson, who played “The Mountain” in hit HBO series Game of Thrones, has announced a physical and competitive mismatch for his boxing debut in January, taking on a pro with an impressive record.

Towering strongman Bjornsson has long been expected to take part in a clash of the giants with long-time British rival Eddie Hall, but his tune-up fight in Rejkjavik on January 16, when he will face Northern Irish boxer Steven Ward, has led fans to fear that a freakshow fight could be on the cards.

Despite being an incredible physical specimen, 2018 World’s Strongest Man Bjornsson has only ever taken on professional fighters in sparring, while 30-year-old “Quiet Man” Ward is a former WBO light heavyweight champion with only one defeat on his 14-fight senior record.

It is unclear whether commissioners will attach any conditions to the encounter of the kind that were imposed upon the veterans fight between Mike Tyson and Roy Jones Jr at the weekend, when US organizers insisted that neither man would be allowed to land a knockout in a bid to reduce the potential risks involved.

They’re all the same size lying down big Stevie @Stevenward_pic.twitter.com/bfFf0yIDqC

If he lies down he’d be like a roundabout

Concerns around non-boxers being granted licenses were again raised by a fight on the undercard of the showdown, when former NBA star Nate Robinson was brutally knocked out by YouTuber Jake Paul, whose training in professional boxing and experience in having already fought gave him a significant advantage that quickly became dangerous in the ring.

Many on social media reacted to news of the meeting between Bjornsson and Ward by asking whether the promotional poster for the fight, which was announced by Tyson Fury’s management company, MTK Global, was real.

“I’m not sure I’d be too keen on taking on a fight so soon if I was Thor,” said one. “Especially not against a pro.”

Think this’ll be same rules as Tyson vs Jones at the weekend? I’m not sure if I was Thor I’d be too keen on taking on a fight so soon. Especially not against a pro.

A 6ft 2in experienced pro will be carrying every moment of this, I can’t see it being more than an easy spar for Ward but it’s free to view and he’s hopefully being paid well so good luck to them both.

Ward, whose career has routinely seen him stand at little more than half of Bjornsson’s weight of around 374lb, expressed his gratitude for the opportunity to fight at a time when the boxing schedule continues to be heavily disrupted by the pandemic.

“At a time when boxing fights and opportunities are hard to come by with the current crisis, I’m excited about this,” he explained, having recovered from losing his title last December by earning a points victory over Jone Volau on his cruiserweight debut in September.

Talking up Ward’s chances of flooring Bjornsson, who is almost 6ft 8in tall, former two-weight world champion Carl Frampton told his countryman: “They’re all the same size lying down.”

Hope he doesn’t mistake your head for an egg, he looks like a hungry big fella. My moneys on ward for the KO in round 16. Very excited for this. Exhibition, aye dead on, jab his beard off

Steven will fcking smash him the fat git

If he’s a bit big for you @Stevenward_ you know where I am 😜 https://t.co/KSZgT6HPPI

Bjornsson said he was “super-amped” for the fight. “Stepping in the ring with a professional boxer will not only showcase what I have learned but also give me the opportunity to find out what I need to work on in the months to come,” said the five-time Europe’s Strongest Man winner.

“Very excited for this learning opportunity and to ‘roll with the punches’.”

While his level of ring craft remains to be seen, the 32-year-old is said to have dropped a considerable amount of weight in training and will indisputably have a strength advantage over Ward.

Before challenging Hall to a fight that is expected to take place in September 2021, Bjornsson smashed the deadlift record set by “The Beast”, lifting an astonishing weight of 1,105lb. (RT)