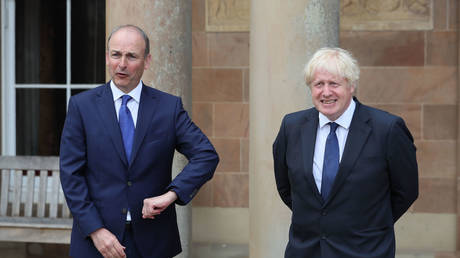 Ireland’s Taoiseach Micheál Martin has said he does not think that UK Prime Minister Boris Johnson wants to rip up a key part of the UK’s Brexit deal with the EU, after the pair met to discuss border checks last week.

On Monday, Irish broadcaster RTE reported that Martin’s government is concerned at the rhetoric surrounding the Northern Ireland Protocol of the Brexit agreement and a potential bid by Westminster to get rid of it completely.

Martin met Johnson at the UK PM’s Chequers country estate on Friday to discuss the Protocol, which in recent months has contributed toward civil unrest in some of Northern Ireland’s loyalist communities.

On top of this, the UK’s lead minister on the Protocol, David Frost, argued in a Daily Mail article at the weekend that the Protocol may not be sustainable, while calling on the EU to help develop a new approach.

Asked about the media reports following the meeting and Frost’s article, Martin told an online event on Monday hosted by Ireland’s Institute of International and European Affairs that it was not his “immediate sense” London wanted to fully rewrite the protocol.