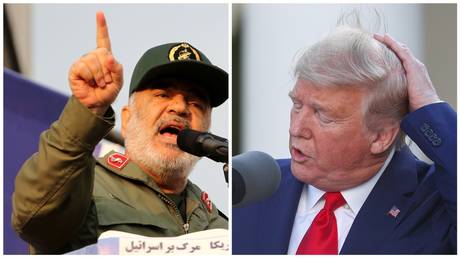 Iran’s top general didn’t shy away from taking aim at Trump, metaphorically, telling him to worry about his signature haircut if the US puts any Iranian in harm’s way. It comes as more shots were fired in the US-Iran war of words.

US President Donald Trump sent a series of headline-grabbing tweets this Tuesday, warning that any attack by Iran on the US “will be met with an attack on Iran that will be 1,000 times greater in magnitude.” The fiery remarks followed media reports claiming that Tehran is considering assassinating Lana Marks, the US ambassador to South Africa.

It didn’t take long for Iran to return the threat, with Chief of Iran’s Revolutionary Guards Corps (IRGC) General Hossein Salami taking a direct swipe at Trump this Saturday. He told local media that retaliation against a potential US action will be “serious” as “we will prove everything in practice.”

If a hair comes off an Iranian head, we’ll blow all your fluff.

Referencing a Politico piece – based on unnamed US intelligence sources – Salami plainly said there is no reason whatsoever for Iran to target Ambassador Marks.

The Islamic Republic may indeed be into carrying out clandestine operations abroad, but it only has in sight targets who were behind in the US drone strike that killed Qassem Soleimani, an influential IRGC General and long-time commander, near Baghdad airport in January, Salami acknowledged. (RT)