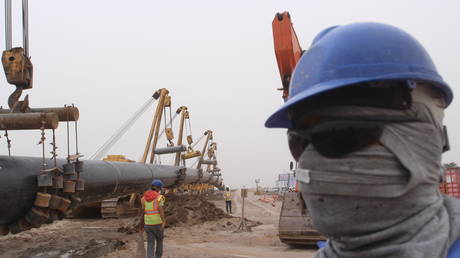 Workers set up a natural gas pipeline at Iraq's border with Iran in Basra, southeast of Baghdad. © Reuters / Essam Al-Sudani

Recent news reports were replete with Iraq declaring its willingness to invest $15 billion into new gas-focused projects that could reduce its reliance on one of Baghdad’s long-standing problems, its gas imports.

Baghdad has committed to an ambitious timeline of reaching self-sufficiency by 2024-2025, with several large-scale projects being developed simultaneously. The announced gas-boosting drive will encompass Total spearheading the revived $7 billion Common Seawater Supply Project (injecting desalinated water into Basrah fields and processing the freed-up gas), Sinopec developing the 4.5 TCf Mansuriyah gas field and another, yet unnamed, investor taking up the 5.6 TCf Akkas gas field. Concurrently to Iraq pushing forward with domestic gas production, Baghdad has also announced that it intends to revisit a long-forgotten pipeline project.

Also on rt.com Iraq would face ‘wrath of US’ if oil pipeline projects with Iran go ahead

Iraq’s oil minister Ihsan Abdul Jabbar claimed that there is an “imminent agreement” to import Syrian gas into Iraq on April 29. Later it was specified that all the natural gas would not originate in Syria rather would transit the country all the way from Egypt. The actual volumes of the prospective imports were not specified. One striking thing about Baghdad and Damascus discussing gas pipelines is that Egyptian representatives, or representatives of companies producing gas in Egypt’s Mediterranean offshore, were absent. Thus, the end buyer was synchronizing watches with a transit nation, whilst the seller of the gas (if there ever was one) remained in the shadows. Overcoming the plethora of challenges that the Egypt-Syria-Iraq gas pipeline would create necessitates exceptional diplomatic talent, pitting Baghdad against Tehran and Washington at the same time. 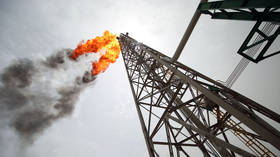 Iraq has tried to play it smooth, sending its Energy Minister Majid Mahdi Hantoush to Tehran 3 days following the announcement. Mr. Hantoush stated that Iraq will continue buy Iranian gas and electricity, also vowing to pay back Iraqi debts vis-à-vis Tehran. In a rather skilful diplomatic tour de force, Iran intends to use debts generated by Iraq throughout these years as hard currency to pay for Russia’s Sputnik-V vaccine. In case of non-payment, this might mean that Moscow has agreed to take over Iraqi debt (i.e. more than $6 billion). Moscow might come out a double winner from a seemingly innocuous Middle Eastern arrears story – in Iran it would secure an outlet for its COVID vaccines, all the while its taking over such a hefty debt would inevitably be used against the federal government in trying to eke out a lucrative license deal or the acquisition of further oil and gas infrastructure.

Ensuring that Egyptian gas does indeed reach Iraq will face several immediate obstacles. The first is an all-pervasive feeling that reviving an old bungled project requires a bit more than just political backing. Back in 2004 the governments of Egypt, Jordan, Syria and Lebanon have agreed to let Baghdad into the Arab Gas Pipeline (AGP) grid, with the presumed idea that Iraq would export its gas towards Europe at some point. The 10 BCm per year capacity Arab Gas Pipeline circumflexes Israel, only to run along the Syrian-Lebanese border all the way up to the city of Homs. Since the onset of the Syrian Civil War in 2011 AGP was essentially used to iron out grid imbalances between Jordan and Egypt – when Egypt was suffering from declining production rates it imported LNG via Aqaba, when Zohr started to ramp up output the flows reversed again, and Jordan found itself importing Egyptian gas again. (RT)