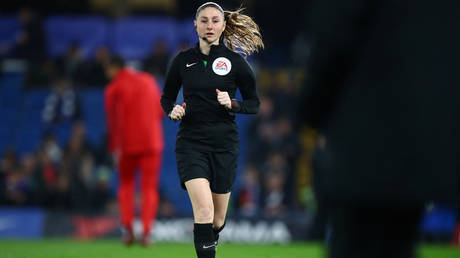 A civil rights group in Iran has reacted after local broadcasters repeatedly censored the legs of a female English Premier League official.

The incident took place during a match between Tottenham Hotspur and Manchester United on Sunday.

Won 3-1 by the visitors, the tie was overseen with the help of assistant referee Sian Massey-Ellis.

But whenever she came up on viewers’ screens, the Islamic Republic of Iran Broadcasting reportedly cut away from Massey-Ellis as she was wearing shorts and exposing her legs.

According to an Iranian civil rights group, this happened more than 100 times over the course of the state television broadcast.

Manchester United’s 3-1 victory over Tottenham on Sunday was censored by #Iran’s state broadcaster IRIB due to Premier League assistant referee Sian Massey-Ellis wearing shorts.The channel interrupted the match dozen of times and replaced it with drone footages of the stadium pic.twitter.com/m4RDh5ymVc

Addressing the furor, My Stealthy Freedom said in a statement: “Islamic Republic leaders do not allow a woman with her hair uncovered and her bare knees to be shown on the state-owned TV.

“The television censors were rattled by the presence of a female referee in shorts. Their solution was to cut away from the live action to views of London’s backstreets, which made a mockery of the game.”

As pointed out elsewhere, this isn’t the first time that such a development has unfolded.

In 2019, the same channel reportedly cancelled plans to show Augsburg and Bayern Munich play when it learned that the new wife of Howard Webb, Bibiana Steinhaus, would be officiating. (RT)