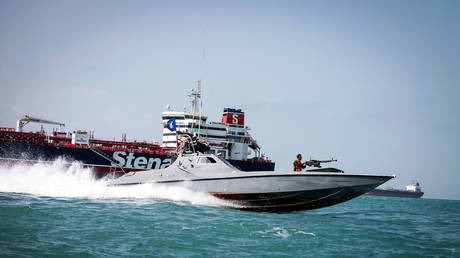 A boat of the Iranian Revolutionary Guard sails near to Stena Impero, a British-flagged vessel owned by Stena Bulk, at an undisclosed place at sea of Bandar Abbas, Iran August 22, 2019. © Nazanin Tabatabaee/WANA (West Asia News Agency) via REUTERS

Iran has seized a vessel traveling through the Persian Gulf for allegedly smuggling diesel fuel, according to the semi-official ISNA news agency. The move comes amid a series of high-profile tanker detentions.

The unidentified vessel was illegally transporting 250,000 liters of fuel to the United Arab Emirates when it was captured by Iran’s elite Revolutionary Guard Corps on Monday. (RT)