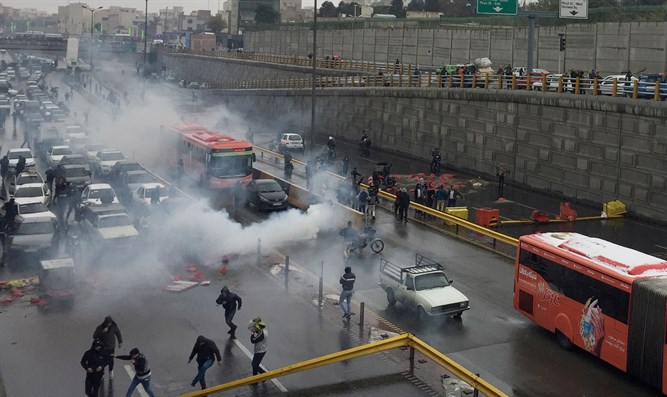 Iran’s top leader on Wednesday denounced an outbreak of deadly unrest as a “very dangerous conspiracy” as authorities reported about 731 banks and 140 government sites had been torched in the disturbances.

Supreme Leader Ayatollah Ali Khamenei said the protests amounted to a plot that Iranians had defeated, referring to the worst anti-government unrest in Iran since authorities put down demonstrations against election fraud in 2009.

The disturbances began on Nov. 15 after the announcement of gasoline price hikes, but quickly turned political, with protesters demanding top leaders step down.

In response, the government has blamed “thugs” linked to exiles and the United States, Israel and Saudi Arabia for stirring up the street unrest.

“A deep, vast and very dangerous conspiracy that a lot of money had been spent on … was destroyed by the people,” Khamenei said in a meeting with members of the paramilitary Basij force which took part in the crackdown against protests, according to his official website.

More than 50 bases used by security forces were attacked and approximately 70 gas stations were also burned, he said, in remarks published by the official IRNA news agency, without specifying where the attacks took place.

According to IRNA, Rahmani Fazli also said up to 200,000 people took part nationwide in the unrest.

London-based Amnesty International said on Monday it had recorded at least 143 protesters killed in the protests.

Iran has rejected Amnesty’s death toll. It says several people, including members of the security forces, were killed and more than 1,000 people arrested. The Center for Human Rights in Iran, a New York-based advocacy group, said the number of arrests was probably closer to 4,000.

The protests took place as new U.S. sanctions imposed this year cut off nearly all of Iran’s oil exports, and as similar protest movements erupted in Iraq and Lebanon against governments that include heavily armed pro-Iran factions.

There has been about a 20 million liter drop in daily gasoline consumption since the price hike, Oil Minister Bijan Zanganeh said, the semi-official ISNA news agency reported.

The struggle of ordinary Iranians to make ends meet has become harder since last year when U.S. President Donald Trump withdrew the United States from Tehran’s nuclear deal with world powers and reimposed sanctions on the country.

Combined with the rising inflation, growing unemployment, a slump in the rial and state corruption, Washington’s “maximum pressure” has caused Iran’s economy to deteriorate.

The government said the gasoline price rises of as much as 50% aim to raise around $2.55 billion a year for extra subsidies to 18 million families struggling on low incomes. The monthly cash payments are set at just 550,000 rials ($4.44) per person.