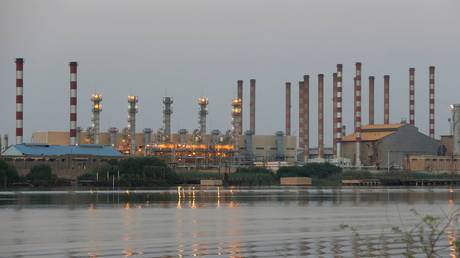 A general view of Abadan oil refinery in southwest Iran, is pictured from Iraqi side of Shatt al-Arab in Al-Faw south of Basra, Iraq, September 21, 2019. © Reuters / Essam Al-Sudani

The United States is waging a war against Iran by imposing sanctions on the Islamic Republic’s crude exports, Iranian Oil Minister Bijan Zanganeh has said.

On Saturday, US President Donald Trump’s administration said that all United Nations sanctions on Iran had been restored, while a conventional arms embargo on the country will no longer expire in mid-October.

“Today Iran is still fighting a war. America has waged a war against Iran with no blood,” Zanganeh was quoted as saying by Oil Ministry’s news agency SHANA on Monday.

Zanganeh called on OPEC members on Sunday to “denounce the use of oil as a political tool for imposition of sanctions and pressures on oil-producing nations.” (RT)