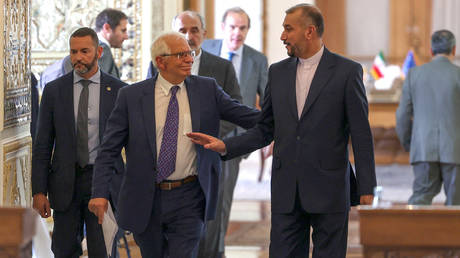 Iran must abandon its “extraneous” demands on treaty partners if it wants to resuscitate the Joint Comprehensive Plan of Action, US State Department spokesman Ned Price declared on Monday, insisting that Tehran drop “further unacceptable demands that go beyond the scope of the JCPOA.”

The US will provide its response to the “final” version of the deal text provided by the EU in private, Price said.

Tehran’s response to the latest draft text had been delivered to the EU’s top envoy, Josep Borrell, on Monday night, just ahead of the deadline set by Brussels, according to senior diplomatic sources cited by Politico and Iran’s semi-official ISNA.

Read more:   Marvel's next films will bring diversity, onscreen and off

The final text supplied by EU negotiators includes a requirement that Iran respond to questions from the International Atomic Energy Agency “with a view to clarifying them” in exchange for the other parties to the deal advising the IAEA to drop a 2019 probe into the discovery of uranium particles at a location not previously declared as a nuclear site. (RT)

On September 29, a delegation led by the First Deputy Minister of Defense – Chief…