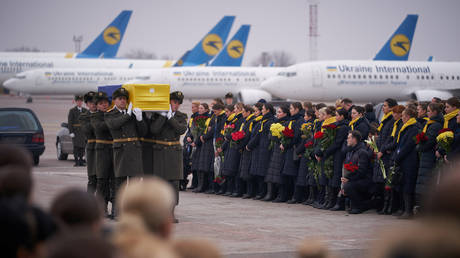 A chain of errors made by the Iranian military resulted in the downing of a Ukrainian passenger plane in January, investigators have said. The tragic incident began with an air defense unit misaligning its radar by 107 degrees.

Ukraine International Airlines Flight 752 was shot down shortly after departing from Imam Khomeini International Airport in Tehran. An interim report by Iran’s Civil Aviation Organization has outlined the chain of mistakes by the Islamic Revolutionary Guard Corps (IRGC), which resulted in the death of all 176 people on board the airliner.

The downing occurred amid a period of high tension between the US and Iran following the assassination of Iranian General Qasem Soleimani in a US airstrike and Iran’s retaliatory ballistic missile strikes against US military bases in Iraq. The Iranian military suspended regular procedures for managing air traffic in the country, which is ordinarily led by civilian authorities, and insisted that only aircraft cleared for flight by the military are allowed in Iranian airspace.

Also on rt.com US ‘escalation in the region’ partly to blame for Iran shooting down Ukrainian passenger plane – Trudeau

An air defense unit deployed near Tehran was relocated shortly before the incident, the Iranian investigators said. Once in its new location, however, it failed to properly adjust its radar station – which ended up being 107 degrees off. This was due to human error, the first of several that led to the tragic outcome, the report said. (RT)