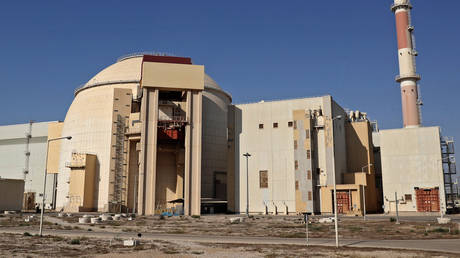 A handout picture provided by the Iranian presidency on October 8, 2021 the Bushehr Nuclear Power Plant, during the visit of the country's president. © AFP / Iranian Presidency

Tehran has not “boycotted” its return to nuclear talks in Vienna, a spokesman for the Iranian Parliament National Security and Foreign Policy Commission has said, stating that Western states must first fulfil their obligations.

Speaking in an interview with an Iranian news agency on Monday, Mahmoud Abbaszadeh Meshkini said that the “ball is in the court of Western countries,” in regards to restarting the stalled discussions on the Joint Comprehensive Plan of Action (JCPOA).

He said countries that have withdrawn from the landmark nuclear accord and failed to deliver their side of the deal should first make sure they fulfil their obligations. His comment took aim at the US, which withdrew unilaterally in 2018 under then-President Donald Trump, as well as Germany, France and the UK, who he claims did not comply with their JCPOA commitments.

The spokesman also said that lifting sanctions imposed by the US and European Union against the Islamic republic is a prerequisite to resuming nuclear talks, as well as those two parties implementing their commitments. (RT)