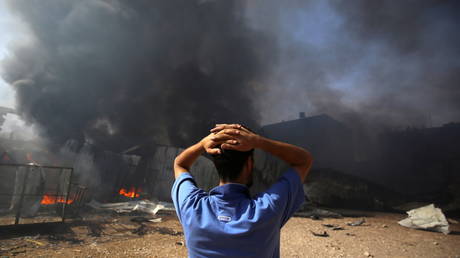 A man stands near a burning sponge factory in the northern Gaza Strip on May 17, 2021. © Reuters / Ashraf Abu Amrah

Iran has urged the international community to stop Israeli attacks against the Palestinians, criticizing the “unacceptable neutrality” shown by multiple nations amid the flare-up in Gaza that has been going on for over a week.

The Iranian Foreign Ministry reiterated the country’s full support for the Palestinian cause. Speaking during his weekly press conference on Monday, spokesman Saeed Khatibzadeh condemned the ongoing hostilities, pinning the blame squarely on Israel.

“The Islamic Republic of Iran strongly condemns the new round of brutal aggression by the Zionist regime against the defenseless people of Palestine and the Gaza Strip, which has resulted in the martyrdom of dozens of civilians, including women and children, and the destruction of many residential buildings,” he stated.

The spokesman also blasted the support for Israel shown by a number of Western nations, as well as criticizing the insufficient attempts to stop the hostilities undertaken by other countries and international organizations. Khatibzadeh did not, however, specifically name any of them. (RT)

“According to the preliminary results of the elections as published by the Central Electoral Commission,…

Qatari companies may participate in renewable energy auctions in Azerbaijan