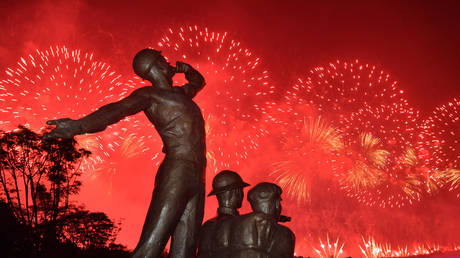 Fireworks light up the sky above a statue at the Shenzhen Bay during a fireworks display marking the 70th founding anniversary of People's Republic of China, on its National Day in Shenzhen, Guangdong province © Reuters

Russia and China are marking 70 years of diplomatic relations. In honour of the milestone, business, culture and media representatives gathered to discuss potential benefits of cooperation with China’s richest province, Guangdong.

More than 200 Russian and Chinese experts from various fields met at the ‘Russia and Guangdong: Building the future together’ forum in Moscow. Symbolically the event coincided with China’s traditional Mid-Autumn Festival. Speakers shared views on the importance of developing regional ties and why Guangdong is proving to be one of the most promising destinations for Russians and other foreigners heading to China for work, study or travel.

The south eastern province of Guangdong is home to more than 100 million people, making it the country’s most populous region. Apart from the biggest population, Guangdong also boasts the largest economy with a provincial GDP ($1.44 trillion in 2018) comparable to some countries’. Its vibrant mega-cities, such as Shenzhen, Zhuhai and the region’s capital, Guangzhou, have long become important international hubs for finance, technology, transportation, trade, and manufacturing. (RT)