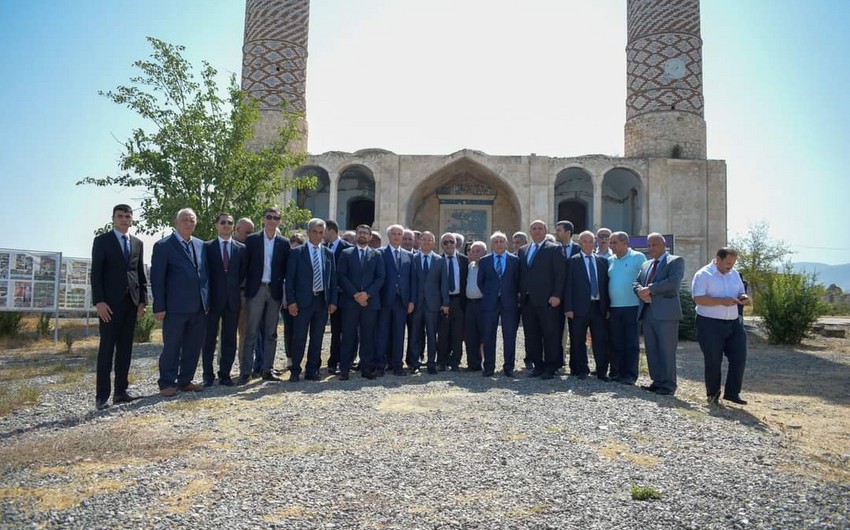 The first day of the 1st International Scientific-Practical Conference on “Building a New Economy in Karabakh: Development impulses from Aghdam” organized by the Special Representation of the President of the Republic of Azerbaijan in Aghdam district, the Ministry of Economy, the Karabakh Revival Fund, and the Institute of Economics of ANAS ended in Aghdam on September 16.

Before the conference, the participants visited the monument complex of the Karabakh khans and the Imarat Cemetery, the Bread Museum, the Aghdam State Drama Theater, the Juma Mosque, and the Central Square in Aghdam.

The participants of the event planted a tree together in Aghdam.

The conference was opened by the Special Representative of the President of the Republic of Azerbaijan Emin Huseynov in the liberated part of the Aghdam district. The First Vice-President of the Republic of Azerbaijan Mehriban Aliyeva’s address to the participants of the International Scientific-Practical Conference was voiced.

Later on, Deputy Minister of Economy Sahib Alakbarov, Chairman of the Board of the Karabakh Revival Fund Rahman Hajiyev, Director of the Institute of Economics of ANAS, Doctor of Economics, Professor Nazim Muzaffarli made speeches.

Rector of the Azerbaijan State University of Economics, Doctor of Economics, Professor Adalat Muradov spoke on the topic of “Innovative and digital Karabakh economy: a conceptual review”, Deputy Chairman of the State Agency for Citizen Services and Social Innovations under the President of the Republic of Azerbaijan Jeyhun Salmanov on “Development potential and prospects of innovative economic spheres in Karabakh”, and Head of the Scientific Center “Restoration of post-conflict areas” of the Institute of Economics of ANAS, corresponding member of ANAS, doctor of economic sciences, professor Akif Musayev on “Issues of effective settlement of post-conflict areas”.

The conference focused on issues such as “Building a new economy in Aghdam: economic potential, priorities and expectations”, “Natural resources and green energy potential of Aghdam and Karabakh”, “Balance between traditional and non-traditional sectors of the economy in Karabakh”, “Return of IDPs to Aghdam and other regions of Karabakh”.

Then a question and answer session was held with the participation of local and foreign guests.

A photo was taken at the end.

The next and final meeting of the conference will be held today in a video format.

All organizational work of the international scientific-practical conference on “Building a new economy in Karabakh: Development impulses from Aghdam” was financed by the Karabakh Revival Fund.