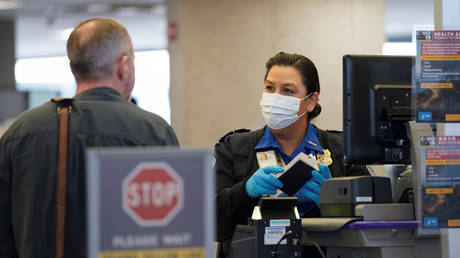 The International Air Transport Association has claimed a win for its vaccine certificate program, pointing to a Singapore-to-London flight as proof of concept for its health-tracking app. But not everyone’s thrilled by the idea.

The first traveler to use the IATA’s purpose-built Travel Pass digital health certificate successfully landed at London’s Heathrow Airport on Wednesday on a flight from Singapore, the airline industry body announced in a press release, gushing that the technology would “securely, conveniently and efficiently help travelers and governments” to keep visitors’ health credentials straight and their own citizens healthy, as the world’s population itches to resume its normal activities after a year of stifling Covid-19 lockdowns.

Despite the fanfare, the negative civil liberties implications for passengers who’ll be expected to use these new digital apps – and the IATA’s Travel Pass is just one of many – have largely been ignored in the public-facing discourse coming from participating airlines and industry organizations.

Read more:   Third of Europeans know 'little' or 'nothing' about Holocaust, survey says

“Digital health credentials will be essential as borders reopen and travel restrictions get progressively lifted worldwide,” acting senior vice president of marketing planning for Singapore Airlines JoAnn Tan said in an IATA press release published on Wednesday. The executive apparently saw nothing more sinister than “using secure digital solutions to verify health credentials, and support a safe and seamless travel experience for our customers” in an app that could theoretically be expected to carry sensitive health data for the entire air-traveling population.

Some airlines, such as Australia’s Qantas, the Philippines’ Cebu Pacific, and Ireland’s Ryanair, have rushed to embrace the notion of “jab and go” vaccine-mandatory air travel, even as some travel agencies have bristled at the notion of forcing air travelers to take a vaccine they do not want.

Announcing its new Covid-19 passport back in December, Singapore Airlines insisted the new biometric model is merely part of the vaunted “new normal” for global travel.

But as Europe rushes to install its own health-certificate-based travel system and reopen for tourism, heads of state are fretting over what kind of baselines to use to evaluate health without mandating one of half a dozen jabs, all of which have varying degrees of acceptance among member states. As of Wednesday, Serbia was the only European country to have vaccinated more than 10% of its citizens, and no European leader has been willing to publicly demand vaccination as a prerequisite to travel (though French and British officials have toyed with the concept). The Israeli government has shown more of a willingness than some of its neighbors to wield the vaccine as both carrot and stick, threatening refuseniks with exclusion from the perks of civilization. (RT)