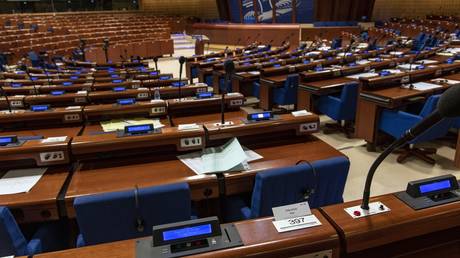 Russia may leave the Council of Europe (CoE) if the 47-member international organization opts to take measures against Moscow, and could possibly even create its own version of the European Court of Human Rights (ECHR).

That’s according to Pyotr Tolstoy, the vice-speaker of the State Duma and the one of the Parliamentary Assembly of the Council of Europe (PACE)’s vice-chairmen.

Russia is under pressure from the CoE after Moscow refused to execute a decision of the ECHR that demanded opposition figure Alexey Navalny be released. Navalny is currently in jail, serving a controversial sentence for embezzlement, after a Moscow court ruled he broke the terms of a suspended judgment from 2014.

Also on rt.com EU to impose ‘restrictive measures’ on ‘those responsible’ for arrest and sentencing of Navalny – European Council president

The CoE has a special mechanism for responding to member nation violations, and Tolstoy says Russia might leave if that process is initiated.

“The first thing we should do is … reconsider our role in this organization. The second, in case the trilateral procedure is launched against our country, is leave,” Tolstoy said at a roundtable meeting of the Federation Council on Monday.

Tolstoy was referring to the CoE’s three-party process, which can lead to the eventual expulsion of a country from the organization. (RT)