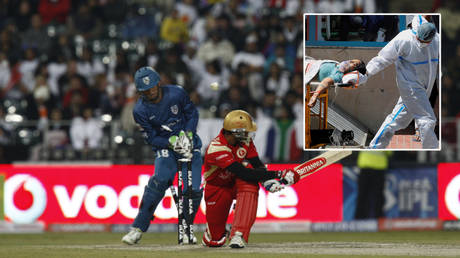 The Indian Premier League (IPL) has been indefinitely suspended after three teams announced confirmed Covid-19 infections among players as the country posted a seven-day average of more than 375,000 cases of the virus.

Sunrisers Hyderabad player Wriddhiman Saha tested positive on Tuesday, prompting the country’s cricket chiefs to announce the suspension of the league after similar instances at the Kolkata Knight Riders and the Chennai Super Kings in recent days.

The spate of infections has led to concerns that the Covid bio-bubble has disintegrated in Ahmedabad and Delhi – two of the cities hosting the Twenty20 tournament, prompting the decision to pull the plug on the competition.

The IPL postponement reflects the worsening crisis in the country, with more than 20 million cases now reported since the start of the pandemic and deaths now numbering more than 220,000 in the country of 1.4 billion people, leading to concerns that India’s healthcare system stands on the verge of total collapse.

Several English players compete in the IPL, including limited overs captain Eoin Morgan, who turns out for the Kolkata Knight Riders. The England Cricket Board (ECB) say that they are awaiting information from the IPL on potentially repatriating their players.

A statement from the IPL said that it will endeavor to return overseas players to their home countries.

English broadcaster Piers Morgan backed the move on social media, writing that it was the “right decision” in what proved to be a divisive comment.

“Wrong decision, Piers. At least the tournament gave them some hope in these awful times,” responded one. “Now they have nothing.”

An Indian citizen disagreed, writing that the country’s cricket officials eventually made the correct call.

Wrong decision Piers, at least the tournament gave them some hope in these awful times. Now they have nothing

“In India, we think it might be the right decision taken very, very late,” they wrote on Twitter.

It is thought that the genesis of some of the infections can be traced to Knight Riders players who were granted permission to leave the bio-bubble to receive treatment for injuries in hospital via the IPL’s so-called ‘green channel’.

The Super Kings subsequently returned positive tests which led to the postponement of their game scheduled for Wednesday, before league chiefs postponed the league as a whole.

“The Indian Premier League Governing Council (IPL GC) and Board of Control for Cricket in India (BCCI), in an emergency meeting, have unanimously decided to postpone IPL 2021 season with immediate effect,” the IPL announced.

“The BCCI does not want to compromise on the safety of the players, support staff and the other participants involved in organising the IPL. This decision was taken keeping the safety, health and wellbeing of all the stakeholders in mind.

In India, we think it might be the right decision taken very very late

“These are difficult times, especially in India, and while we have tried to bring in some positivity and cheer, it is imperative that the tournament is now suspended and everyone goes back to their families and loved ones in these trying times.

“The BCCI will do everything in its powers to arrange for the secure and safe passage of all the participants in IPL 2021.

“The BCCI would like to thank all the healthcare workers, state associations, players, support staff, franchises, sponsors, partners and all the service providers who have tried their best to organize IPL 2021, even in these extremely difficult times.”

The decision to postpone the IPL season will likely be met with approval in some quarters, as the decision to push on with the campaign was seen by many as unnecessary given India’s current Covid situation.

The repatriation of overseas players looks set to be an issue all to itself. More than 30 Australian players are involved in the IPL but the country’s Covid-19 laws prohibit entry to the country from India after a bill was passed on Saturday which shuts the borders to its own citizens if they have been in India for 14 days prior to entry.

If our Government cared for the safety of Aussies they would allow us to get home. It’s a disgrace!! Blood on your hands PM. How dare you treat us like this. How about you sort out quarantine system. I had government permission to work on the IPL but I now have government neglect

Failure to observe the law can result in heavy fines and a prison sentence of five years.

The guidelines have proved to be unpopular with Australian citizens connected to the IPL, with one Australian commentator savaging the travel ban on social media.

“If our government cared for the safety of Aussies, they would allow us to get home,” he wrote online. “It’s a disgrace.

“Blood on your hands PM [Australian prime minister, Scott Morrison]. How dare you treat us like this? How about you sort out the quarantine system?

“I had government permission to work on the IPL but I now have government neglect.” (RT)