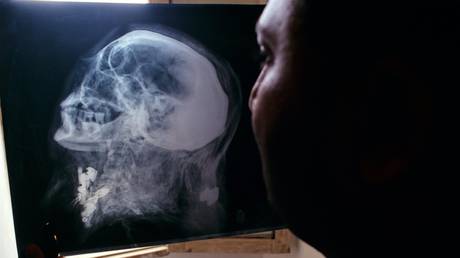 DIY construction can save a lot of money in the short term but cost you dearly in other ways, as one unfortunate home improvement enthusiast in India discovered recently, after having his brain skewered by a metal rod.

While building a well on his property, Sanjay Bahe, 21, from Balaghat in central India was working on a platform above the nearly-complete watering hole when it gave way beneath his feet. He fell onto the rusted metal rods below like some macabre booby trap from an Indiana Jones film, impaling both his hand and skull in the process.

He was somehow removed from the well without further injury and rushed to hospital for emergency surgery, remaining conscious throughout the entire ordeal, including the 90-minute brain operation to remove the rusted rod from his skull. It had pierced from his right temporal lobe through to the left frontal region.

Construction worker’s miracle escape after he survives being impaled in the head https://t.co/mhboy0Q60Cpic.twitter.com/ngbKPFQyM8

“Giving anaesthesia to the patient in such cases is difficult. I performed the surgery with all caution so that damage to the surrounding structures shouldn’t happen,” senior neurosurgeon Dr. Pramod Giri said as cited by The Daily Mail. The surgeon added that the metal rod missed Bahe’s major cranial blood vessels by a matter of mere millimeters. (RT)