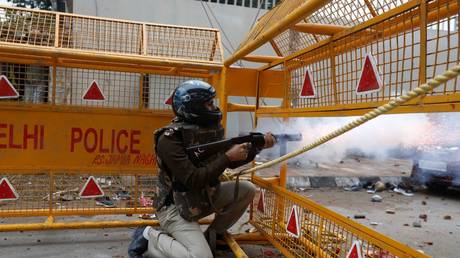 A police officer fires a tear gas shell towards protestors during a protest against the Citizenship Amendment Bill, outside the Jamia Millia Islamia University in New Delhi, India, December 13, 2019. ©  REUTERS/Adnan Abidi

The Indian Army tweeted on Saturday that people should avoid “lies and propaganda being spread on social media by harmful elements,” as troops were redeployed to the state of Assam, which is engulfed in protests against the Citizenship Amendment Bill (CAB).

Guard against FAKE NEWS & DISINFORMATIONPlease guard against vicious #lies & #disinformation being spread by some on social media. #IndianArmy#NationFirstpic.twitter.com/J0x012G9PK

New Delhi says the CAB is necessary to protect persecuted minorities from Muslim-majority Pakistan, Bangladesh, and Afghanistan – Hindus, Christians, Sikhs, Buddhists, Jain, and Parsis. But it does not include Muslims in the six religious groups – a fact that prompted Muslims in Assam to voice their anger. (RT)