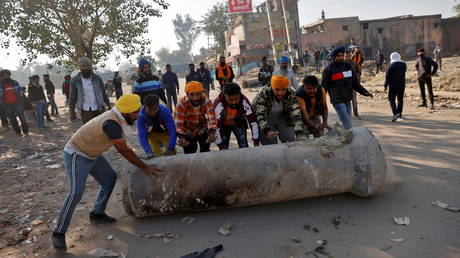 Farmers push a cement pipe to use it as a roadblock during a protest against the newly passed farm bills at Singhu border near Delhi, India, November 28, 2020. © Reuters / Danish Siddiqui

Delhi lodged a formal protest with Canada on Friday, saying that Prime Minister Justin Trudeau’s statement about protests by Indian farmers near the capital constituted interference in its domestic affairs.

Trudeau met with the Indian community in Canada this week and expressed concerns about farmers protesting. Most of them are from the Sikh-dominated Indian state of Punjab, and they camped out on Delhi’s outskirts to protest against agricultural reforms. (RT)