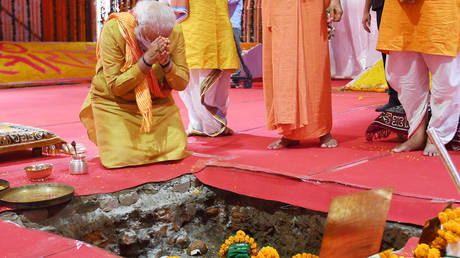 India’s PM Narendra Modi has laid the foundation stone of a future Hindu shrine in the city of Ayodhya. The project became possible after a court sided with Hindus over Muslims about whose temple should be built there.

Modi told a gathering at Ayodhya, an ancient city in India’s northern Uttar Pradesh State that the shrine “will keep inspiring the future generations,” and its construction will serve as “an instrument to unite the country.”

It is an emotional moment for India. A long wait ends today. A grand temple will now be built for Lord Ram who had been living under a tent for many years.

Local media reported that festivities that had been planned were scaled down due to the Covid-19 outbreak. At the ceremony, the PM was accompanied by Hindu priests and a number of top officials. (RT)