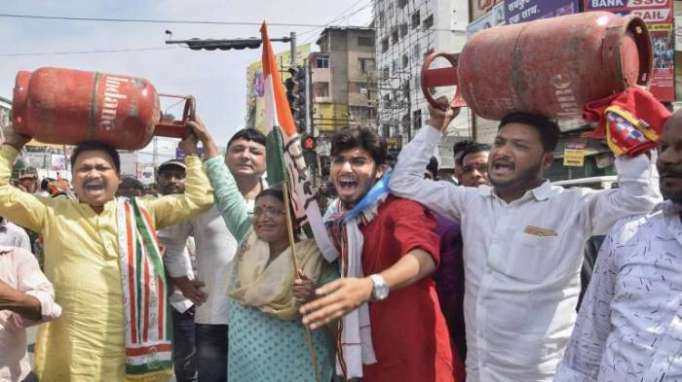 Nationwide protests against record high petrol and diesel prices shut down businesses, government offices and schools in many parts of India on Monday, and in some places protesters blocked trains and roads and vandalized vehicles.
Gearing up for a general election less than nine months away and provincial polls expected in some states later this year, opposition parties banded together to organize their first protest action in a joint campaign to stir discontent with Prime Minister Narendra Modi’s Hindu nationalist government.

The protests turned violent in some states. Television images showed protesters breaking car and bus windows in the Patna, the state capital of the northern state of Bihar, and protesters blocked roads with burning tyres there and elsewhere, including in Modi’s home state of Gujarat.

Taxes on petrol and diesel, which account for more than a third of retail fuel prices, are one of the biggest sources of income for the government, and one of the most emotive issues for voters.

Past governments have usually lowered taxes whenever international oil prices shot up, but Modi’s administration has made little concession so far.

“The Modi ‘govt’ is stealing from the people of India with excessive taxes on fuel,” the main opposition Congress party said on Twitter, posting graphics on many how prices of many commodities have risen under Modi.

“Not just fuel, even day to day essentials are skyrocketing.”

Modi’s Bharatiya Janata Party (BJP) accuses its opponents of “unnecessarily politicizing” high fuel prices and the weakening of the rupee currency, which it blames on external factors like the economic woes of countries such as Turkey.

Nevertheless, Modi’s popularity has come down in the past few months and his party is likely to face a tough challenge in three BJP-ruled states – Rajasthan, Madhya Pradesh and Chattisgarh – expected to vote this year, and at the general election expected early next year.