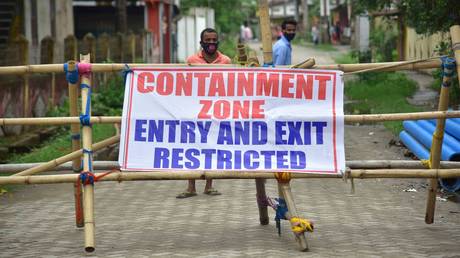 India’s latest upsurge in coronavirus cases, along with its highest daily toll of Covid-19-linked deaths, is expected not only to hamper its economic recovery but also to drag down several sectors vital for the world’s economy.

Rising infections are forcing the country to impose stricter lockdowns, which could have a dramatic impact on several industries, including financial services, global shipping, clothing, pharmaceuticals and many others.

The situation may create a big “shortage of seafarers” as some 200,000 of an estimated 1.7 million of the world’s sailors come from India, said Guy Platten, Secretary General at the International Chamber of Shipping, as quoted by CNN Business.

Since nearly 80% of the world’s trade volume is carried on ships, global shipping could feel the pain of a worker shortage. That may be exacerbated by the latest bans imposed on flights from India, preventing Indian workers from moving to ports around the world, and crews from swapping.

Additionally, India is home to the world’s largest vaccine maker. The Serum Institute of India (SII), produces over 60% of all vaccines sold across the globe. Moreover, the country is the world’s largest supplier of generic drugs – copies of brand-name pharmaceuticals that have the same effects but cost less.

The latest outbreak in India has partially stalled the world’s vaccination drive, as the country’s authorities have shifted focus from shipping vaccines abroad to prioritizing Indian citizens. Meanwhile, Indian drug makers, which receive nearly 70% of their raw materials from China, reportedly expect production declines due to the vulnerability of supply chains. (RT)