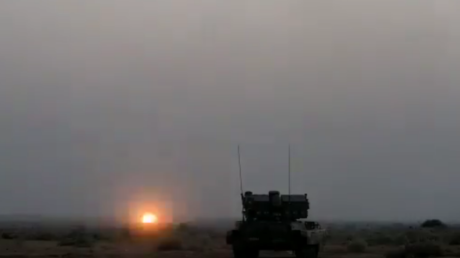 Amid ongoing border tensions with China, India’s defense agency has completed the final test of its third-generation anti-tank missile, which is now set to be deployed by its army.

On Thursday, India’s Defence Research and Development Organisation (DRDO) announced that the Nag anti-tank guided missile (ATGM), intended for use in the four-kilometer range, has successfully completed its final trial and is now ready for deployment to the frontline.

Final user trial of 3rd generation Anti Tank Guided Missile (ATGM) NAG was carried out today on 22 Oct 2020 at 0645 hrs from Pokhran range. The missile was integrated with the actual warhead and a tank target was kept at designated range. pic.twitter.com/GZ4oJWyNWs

In response to continuing skirmishes with its neighbors China and Pakistan along the disputed borders, the DRDO has been actively testing domestic missile technologies in an effort to reduce its reliance on foreign defense equipment suppliers.

The third-generation ATGM, equipped with an imaging infrared seeker and integrated with a warhead, has, over several years, completed 10 trial launches, each of them declared successful. The missiles are now slated for production by the state-owned manufacturer Bharat Dynamics and subsequent deployment. (RT)

An agreement has been signed on the establishment of a joint Turkish-Russian monitoring center, according…

On 1 December 2020, Belarus will reduce export duties on oil and some oil products…

China has hit back at the Australian Government, accusing it of attempting to “stoke domestic…

The National Anthem of Azerbaijan was played in the liberated Lachin region, Report informs. The…

Japan, Kuwait to ink agreement on joint stockpiling of oil for Asia

Venezuela ramps up oil exports against US sanctions