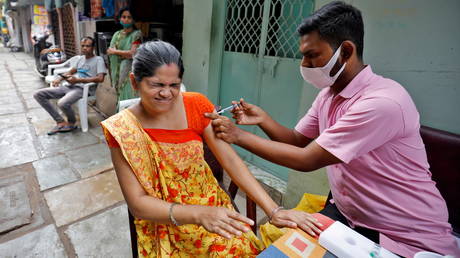 FILE PHOTO: A woman reacts as she receives a dose of the COVISHIELD vaccine, a coronavirus disease (COVID-19) vaccine manufactured by Serum Institute of India, in an alley at a slum area in Ahmedabad, India, September 28, 2021. © Reuters / Amit Dave

In a huge effort to vaccinate its population, India has celebrated the landmark of administering 1 billion Covid shots. However, millions of Indians are still yet to receive their first dose.

Taking to Twitter on Thursday, Prime Minister Narendra Modi hailed the milestone: “India scripts history. We are witnessing the triumph of Indian science, enterprise and collective spirit of (1.3 billion) Indians.”

Photos uploaded to Modi’s account on the social media platform show him at a vaccination center at a hospital in the Indian capital.

Today, when India has achieved a #VaccineCentury, I went to a vaccination centre at Dr. Ram Manohar Lohia Hospital. The vaccine has brought pride and protection in the lives of our citizens. pic.twitter.com/MUObjQKpga

Media outlet Times Now displayed the historic countdown, with its presenter claiming that the “super powers are all looking at India” as New Delhi passed the 1 billion-dose mark.

Read more:   Farid Mansurov: Premier League could become a hotbed of the virus

Health Minister Mansukh Mandaviya said he will launch a song and an audio-visual film at the Red Fort in New Delhi on Thursday in celebration of the historic moment.

India’s vaccination campaign got off to a slow start in the middle of January, but has since seen around three-quarters of its 944 million adults receiving at least the first dose, while 31% have received two shots.

Modi’s government wants all adults to be vaccinated this year, and has even released “a song that slays vaccine hesitancy,” along with a video that shows Indians being vaccinated. (RT)