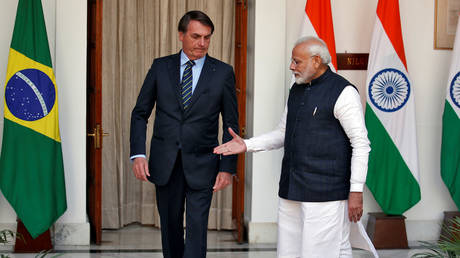 iBrazilian President Jair Bolsonaro’s first meeting with India’s Narendra Modi appears to have boosted economic ties between the two emerging powers, which signed a trove of trade and investment agreements on Saturday.

President Bolsonaro, who became the first Brazilian head of state to visit India, had a seemingly productive one-on-one with Prime Minister Modi earlier in the day. The two leaders exchanged pleasantries and warm words before proceeding with talks – the most closely watched part of the meeting.

“Your visit to India has opened a new chapter in bilateral ties between India and Brazil,” Modi said in his media statement while greeting Bolsonaro.

At the end of the day, Brazil and India – both members of the informal BRICS bloc – inked 11 agreements, among them a Strategic Partnership Action Plan and a Bilateral Investment Treaty. Other documents related to bio-energy, cyber security, investment, health, and medicine. (RT)