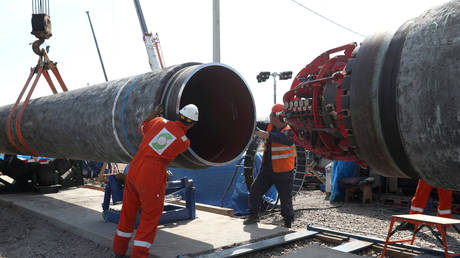 FILE PHOTO: Workers are seen at the construction site of the Nord Stream 2 gas pipeline in the Leningrad region, Russia, on June 5, 2019. ©  Reuters / Anton Vaganov

An EU parliament resolution, backed by 581 MEPs out of 675 present, directs members to ramp up sanctions against Russia to stop the Nord Stream 2 project “once and for all,” linking it to opposition figure Alexey Navalny’s arrest.

The EU member states should take “an active stance” on Navalny’s 30-day arrest in Russia. This is according to a non-binding resolution adopted on Thursday, with 581 votes in favor, 50 against and 44 abstentions.

Also on rt.com Alexey Navalny remanded in custody for 30 days after unexpected hearing in police station one day after arriving back in Russia

The list of “significantly tighter” restrictions the European nations are encouraged to impose against Moscow includes personal sanctions against anyone involved “in the decision to arrest and imprison” the opposition figure, who returned to Russia on January 17 following an almost six-month-long treatment in Germany after an apparent poisoning during a trip to Siberia.

Another step suggested by the MEPs is putting a stop to the Russian gas pipeline project Nord Stream 2 “once and for all.” The multinational project, which would deliver Russian gas to Europe and particularly to Germany, is currently under construction despite fierce opposition from Washington, which calls it a threat to America’s and Europe’s security interests.

Now, a day after new US President Joe Biden has been sworn into office, the EU parliament resolution calls on the bloc’s member states to “immediately stop the completion of the controversial pipeline.” It would be an ideal moment to “strengthen transatlantic unity in protecting democracy and fundamental values against authoritarian regimes,” the text asserts.

Also on rt.com Gazprom warns investors that Nord Stream 2 could be canceled as Trump announces more US sanctions in ‘parting gift’

Several European leaders, including German Chancellor Angela Merkel, have repeatedly criticized the US pressure, arguing that Washington is interfering in Europe’s internal affairs to advance its own interests, namely to sell its own liquefied natural gas. (RT)

The massacre of the civilian population, including children and women, in Azerbaijani Khojaly 29 years…