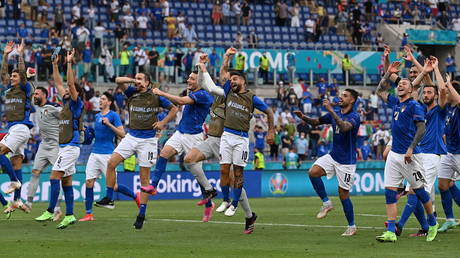 Matteo Pessina was the hero as Italy made it three wins for their efforts in Group A after they saw off ten-man Wales in Rome – with Roberto Mancini’s men setting a European Championships record en route to the knockout stages.

Italy had been cast into the somewhat unfamiliar role of dark horses ahead of the start of the tournament but now, three games deep, the Azzurri are looking every inch champions-in-waiting.

Atalanta playmaker Pessina was the Italian hero as he prodded home a first-half Marco Veratti free kick to give his side what turned out to be an unassailable advantage against the Welsh, who struggled to compete with the Italians’ grinding, oppressive display.

1 – Marco Verratti led all players in the Italy vs Wales match for touches (136), passes completed (103), chances created (5) and tackles (4), as well as assisting the only goal of the game. Gifted. #EURO2020pic.twitter.com/akWQSbejgM

Italy’s job was made easier when Wales’ Ethan Ampadu was issued with his marching orders 10 minutes after half-time (to his great surprise, it must be noted) for stamping on Federico Bernardeschi’s left foot.

Gareth Bale uncharacteristically spurned a gilt-edged chance to level the game in the second half, but that was about as much resistance as the Welsh could muster in 90 minutes.

Incredibly, according to the statisticians Italy now become the first team in European Championship history to have emerged from the group stages with three wins and no goals conceded – while also tying the national team’s almost 90-year old record for 30 games undefeated.

Matteo Pessina scores the lone goal for Italy, who wins Group A in EURO 2020 with Wales finishing 2nd. The @azzurri become the first team with 3 shutout victories at a EURO group stage and tie their national team record for longest unbeaten streak at 30 games, set in 1935-39. pic.twitter.com/2vmqpM5NQ6

Despite their impressive form in qualifying, few pundits had plumped for the Italians when forecasting this tournament’s eventual winners – with most opting for one of France, Portugal or Germany – but each of those sides have so far displayed something of a soft underbelly.

Not so Italy. While previous Italian sides could boast a Baggio (or two), a Pirlo, a Maldini or even a Del Piero, the 2021 iteration of the Azzurri seems greater than the sum of its parts, formed as ever on a solid steel backline.

Italy haven’t lost a competitive match that they scored in since June 2013.Wow 🤯👏 pic.twitter.com/NsvtbMfCym

Italy have got some steel about them. Big man team. No fluff. Scrappers.

Tougher tests will await in this tournament but with Italy likely facing one of Austria or Ukraine when we move into knockout football, one can likely expect that this Italian side won’t be requiring an early plane ticket home.

Despite the defeat, Wales also punched their ticket into the round of 16 after Switzerland’s 3-1 humbling of Turkey wasn’t enough to overcome Wales’ superior goal difference.