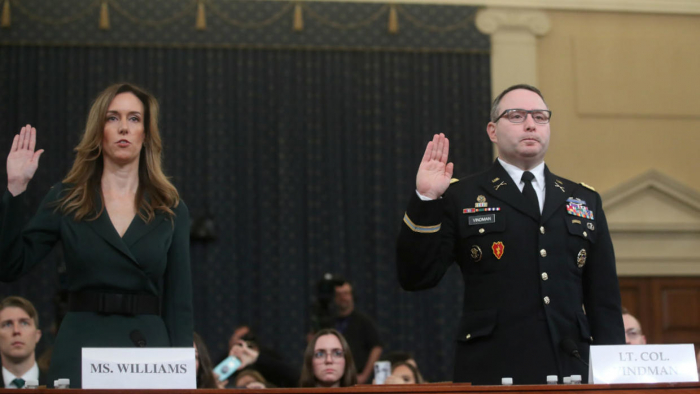 One top national security aide who listened to President Donald Trump’s July call with Ukraine’s president called it “improper.” Another said it was “unusual.” The two testified Tuesday at House impeachment hearings as the inquiry reached deeper into the White House.

Lt. Col. Alexander Vindman, an Army officer at the National Security Council, and Jennifer Williams, his counterpart at Vice President Mike Pence’s office, said they had concerns as Trump spoke on July 25 with the newly elected Ukraine president about political investigations into Democrat Joe Biden.

“What I heard was inappropriate,” Vindman told lawmakers.

Said Williams, “I found the July 25th phone call unusual because, in contrast to other presidential calls I had observed, it involved discussion of what appeared to be a domestic political matter.”

Vindman, a 20-year military officer arrived at Capitol Hill in military blue with a chest full of service medals, and said he reported his concerns “out of a sense of duty.”

He did so, he said, “because they had significant national security implications for our country.”

An immigrant, who arrived in the U.S. as a toddler from Ukraine, Vindman told the panel he was grateful his father brought the family to the U.S. 40 years ago and for “the privilege of being an American citizen and public servant, where I can live free of fear for mine and my family’s safety.”

In the audience was his twin brother, also an official at the National Security Council and among those he told about his concerns over Trump’s phone call.

Addressing his late father, he said, “Do not worry, I will be fine for telling the truth.”

In all, nine current and former U.S. officials are testifying as the House’s impeachment inquiry accelerates. Democrats say Trump’s pressure on Ukraine to investigate his Democratic rivals as he withheld U.S. military aid Ukraine needed to resist Russian aggression may be grounds for removing the 45th president.

Trump says he did no such thing and the Democrats just want him gone.

Gaveling open the second week of live televised hearings, the Democratic chairman leading the probe, Rep. Adam Schiff, noted that Trump tweeted against Williams over the weekend and Vindman has seen “far more scurrilous attacks” on his character by the president’s allies.

Schiff, who has warned that the president’s attacks on others in the impeachment inquiry could be seen as intimidation, said the witnesses “are here because they were subpoenaed to appear, not because they are for or against impeachment. That question is for Congress.”

The top Republican on the House Intelligence Committee, Rep. David Nunes, began the hearing with an extended attack on the media and dismissed last week’s testimony as “secondhand and thirdhand conversations.” He blasted the hearing as a “hoax.”

Vindman and the other witnesses have testified in earlier, closed-door sessions. Their depositions have been publicly released.

“I did not think it was proper to demand that a foreign government investigate a U.S. citizen,” said Vindman. He said there was “no doubt” what Trump wanted from Ukrainian President Volodymyr Zelenskiy.

It wasn’t the first time Vindman, a decorated Iraq War veteran, was alarmed over the administration’s push to have Ukraine investigate Democrats, he testified.

Earlier, during an unsettling July 10 meeting at the White House, Ambassador Gordon Sondland told visiting Ukraine officials that they would need to “deliver” before next steps, which was a meeting Zelenskiy wanted with Trump, the officer testified.

“He was talking about the 2016 elections and an investigation into the Bidens and Burisma,” Vindman testified, referring to the gas company in Ukraine where Biden’s son Hunter served on the board.

“The Ukrainians would have to deliver an investigation into the Bidens,” he said. “There was no ambiguity.”

On both occasions, Vindman said, he took his concerns about the shifting Ukraine policy to the lead counsel at the NSC, John Eisenberg.

Williams, a career State Department official who has worked for three presidential administrations and counts former Secretary of State Condoleezza Rice a “personal hero,” said she too had concerns during the phone call, which the aides monitored as is standard practice.

When the White House produced a rough transcript later that day, she put it in the vice president’s briefing materials. “I just don’t know if he read it,” Williams testified earlier in her closed-door House interview.

Pence’s role throughout the impeachment inquiry has been unclear, and the vice president’s aide was questioned by lawmakers looking for answers.

Trump has assailed Williams, associating her with “Never Trumpers,” even though there is no indication she has shown any partisanship.

The president wants to see a robust defense by his GOP allies on Capitol Hill, but so far Republicans have offered a changing strategy as the fast-moving probe spills into public view. They’re expected to mount a more aggressive attack on the witnesses as they try to protect Trump.

In particular, Republicans were expected to try to undercut Vindman, suggesting he reported his concerns outside his chain of command, which would have been NSC official Timothy Morrison, not the NSC lawyer.

Under earlier questioning, Republicans wanted Vindman to disclose who else he may have spoken to about his concerns, as the GOP inches closer to publicly naming the still anonymous whistleblower whose report sparked the inquiry.

GOP Sen. Ron Johnson, who was deeply involved in other White House meetings about Ukraine, offered a sneak preview of this strategy late Monday when he compared Vindman, a Purple Heart veteran, to the “bureaucrats” who “never accepted Trump as legitimate.”

“They react by leaking to the press and participating in the ongoing effort to sabotage his policies and, if possible, remove him from office.” It is entirely possible that Vindman fits this profile, said Johnson, R-Wis.

The White House has instructed officials not to appear, and most have received congressional subpoenas to compel their testimony.

The witnesses are testifying under penalty of perjury, and Sondland already has had to amend his earlier account amid contradicting testimony from other current and former U.S. officials.

Sondland, the wealthy donor whose routine boasting about his proximity to Trump has brought the investigation to the president’s doorstep, is set to testify Wednesday. Others have testified that he was part of a shadow diplomatic effort with the president’s personal lawyer, Rudy Giuliani, outside of official channels that raised alarms.

Morrison has referred to Burisma as a “bucket of issues” – the Bidens, Democrats, investigations – he had tried to “stay away” from.

Sondland met with a Zelenskiy aide on the sidelines of a Sept. 1 gathering in Warsaw, and Morrison, who was watching the encounter from across the room, testified that the ambassador told him moments later he pushed the Ukrainian for the Burisma investigation as a way for Ukraine to gain access to the military funds.

Volker provided investigators with a package of text messages with Sondland and another diplomat, William Taylor, the charge d’affaires in Ukraine, who grew alarmed at the linkage of the investigations to the aid.

A hotelier who donated $1 million to Trump’s inauguration, Sondland is the only person interviewed to date who had direct conversations with the president about the Ukraine situation.

Morrison said Sondland and Trump had spoken about five times between July 15 and Sept. 11 – the weeks that $391 million in U.S. assistance was withheld from Ukraine before it was released.