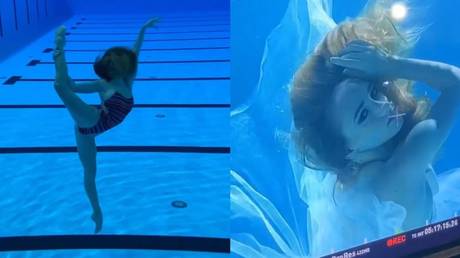 Russian synchronized swimming star Vlada Chigireva has said she is ready to play the role of mermaid Ariel from Disney’s famous animated film, showing off her incredible underwater skills.

The 25-year-old recently made her TV debut by appearing in a music video with Russian singer Yury Kiselev, known under the nickname Yurkiss.

The Olympic gold medalist shared the backstage footage where she ‘dances’ under the water wearing a white cocktail dress taking up the role of a mermaid.

“Does anyone plan to film the Little Mermaid movie? I have been waiting for this role all my life,” Chigireva wrote joking that she was late for Disney’s cast last time.

The swimmer, who holds 11 world and three European titles, in addition to her Olympic gold, is getting ready to defend her title at next year’s Summer Games in Tokyo.

Russia’s ‘mermaids’, as the country’s synchronized swimmers are often called, have been unbeaten on the international stage for 20 years since winning at the 2000 Summer Olympics in Sydney. (RT)

As of Tuesday evening, Biden had won more than 80,011,000 votes, while President Donald Trump…

Kalbajar has returned to its true owners, which is an important event in the history…

Tesla founder Elon Musk is not the second richest man on the planet. This is…

“The risk of Covid-19 transmission from outside the country is very high,” Health Minister Nguyen…

The agreement on a complete cessation of hostilities in Nagorno-Karabakh is being observed, Pentagon spokesman…

Joe Biden, who announced his victory in the US presidential election, said that he would…