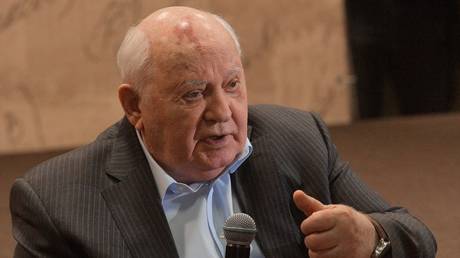 On his 90th birthday, the Soviet Union’s first and last president, Mikhail Gorbachev, has revealed his belief that perestroika is his biggest life achievement and led to the “end to the totalitarian system.”

Speaking to Russian news agency TASS, in an interview published on Tuesday, the former Soviet leader also argued that his policy of glasnost was essential for making changes within the country.

Gorbachev headed the USSR from 1985 until it fell apart in 1991 and is considered one of the most significant figures of 20th-century history, having helped to end the Cold War. However, while he has a good reputation outside of the country, inside Russia he is viewed rather differently. Many hold him responsible for the post-Soviet economic crisis which led to a steep decline in living standards, as well as a diminution of Moscow’s status on the world stage.

Also on rt.com Gorbachev, once America’s greatest friend in Moscow, believes Capitol invasion calls into question stability of US as a state

After he became leader in 1985, Gorbachev implemented his two flagship policies – perestroika and glasnost.

“In politics, many things look clearer now, of course: there were some missteps,” Gorbachev told TASS. “But, if I had had no trust in the people, perestroika would have never started. I am also bashed for glasnost. But without glasnost, nothing would have changed in the country.”

“I made fundamental decisions both in my life and in politics. I wouldn’t change them.”

Perestroika, seen by many as a significant factor in the dissolution of the USSR, was an attempt to restructure the economic system and end stagnation, which had troubled the country since the 60s. As part of the policy, Gorbachev introduced market-like reforms into the socialist system, which subsequently led to food shortages and political tensions. Alongside perestroika, glasnost was Gorbachev’s policy of increased government transparency.

When it comes to post-soviet economic struggles, Gorbachev refuses to take any of the blame, explaining his belief that Russia needed to evolve slowly and pointing to China as an example. (RT)