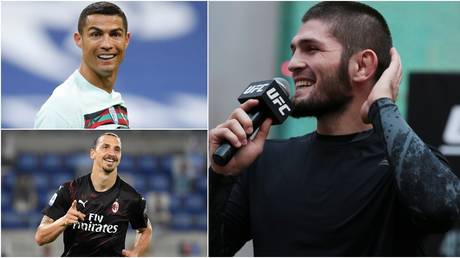 Khabib discussed his love of football and said he is in touch with Cristiano Ronaldo and Zlatan Ibrahimovic. © Reuters.

UFC champion Khabib Nurmagomedov has reached the pinnacle of his own sport but admits he pays far closer attention to the ‘beautiful game’ than he does mixed martial arts, and says he has learned much from Cristiano Ronaldo.

Nurmagomedov defends his world title against American contender Justin Gaethje at UFC 254 this weekend in a fight in which he is expected to face a barrage of punishing leg-kicks – but if Khabib had had his way as a youngster, he could have been dealing with an entirely different kind of kick altogether in his sporting career.

Also on rt.com ‘Of course Khabib is going to win’: Cristiano Ronaldo backs his ‘brother’ Khabib Nurmagomedov to defend title at UFC 254 (VIDEO)

Football-mad Khabib is known to be an avid fan of Real Madrid, as well as keeping a watchful eye over Turkish side side Galatasaray and his most local team in Russia, Anzhi Makhachkala – and he says that as much as he enjoys his day job, it pales in comparison to professional football.

Read more:   Why email loses out to popular apps in China

“For me, football is the number one sport,” Khabib said to UFC Russia. “When I was a child, I dreamed of being a football player and I have always watched football. In a way, football is better [than mixed martial arts], you don’t have to fight or smash somebody – you just go onto grass and show everyone what you are capable of doing professionally.

“Of course, it is hard but I like it more, more than UFC, more than MMA.”

Khabib, who admitted that he maintains friendships with football stars Cristiano Ronaldo, Karim Benzema and Zlatan Ibrahimovic, says that his interest in mixed martial arts has waned in recent years. His interest in football, however, remains unobscured.

“I have been watching football for a long time and I am not tired or bored of it at all,” he said. “I might get bored of UFC sometimes. I used to watch all the fights but not now.

“I know all the football teams and clubs, I remember who won the UEFA Cup, Champions League, European Championships – I can even remember all [the] playing group compositions.

“The FIFA World Cup, which position he took, what was his name, all the goals – I know it for a fact.”

Of course, one thing that fighting has afforded Nurmagomedov is a commodity he says he was never truly interested in: fame. And while his global fanbase and those millions of Instagram followers can often shine an uninvited light on him, it has given him several opportunities at life experiences most of us could only dream of – such as comparing notes with some of the best athletes on the planet.

“I wanted to meet Muhammad Ali, but at the time he was unable to do it,” Khabib said. “I had an opportunity to fly and meet him, but he was unable. I decided not to disturb him as he was ill but if he had been healthy, I would have talked to him.

“When I met Cristiano, I had so many questions to ask. I wanted to know how he was able to maintain his desire to be the best for 17 years straight. Since 2003 he has been at the highest level and every time at the end of the season he is in the top-10 players ranking list.

“I was wondering how he managed to achieve it. As far as I understand it, his internal energy, desire, motivation, discipline, recovery techniques, regime, nutrition – he combines all of it.” (RT)