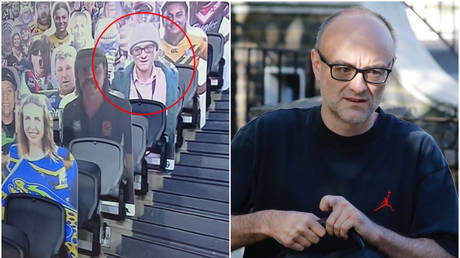 From Durham to Barnard Castle to Australia, it seems there is no stop too far for Boris Johnson aide Dominic Cummings’ alleged lockdown-breaking travels as fans entered his image to be part of the crowd at a Sydney rugby match.

It seems the travels during lockdown for UK government aide Cummings know no bounds. His trips from London to Durham and Barnard Castle have been well documented, a trip further afield has seemingly gone Down Under the radar.

Sydney Roosters made a winning start to their National Rugby League (NRL) title defence with a dominant 28-12 over neighbours and rivals South Sydney Rabbitohs on Friday in an empty stadium as per league rules during the Covid-19 pandemic.

Who else should turn up sitting in Parramatta’s Bankwest Stadium with the Rooster faithful – none other than Cummings.

Right-hand man and senior advisor to UK Prime Minister Johnson, Cummings been panned in the press for reportedly flouting lockdown rules by taking two 260 each-way trips from London to Durham in the north of England to see his parents to supposedly arrange childcare for his young son when he and his wife were ill with symptoms of coronavirus.

He received further intense scrutiny when it was revealed he had during one trip gnomon a day out to famous UK monument Barnard Castle 30 miles away and was the subject of ridicule for his hogwash explanation that the drive was to “test his eyesight” before the drive back to London.

Also on rt.com Cummings made ‘minor breach’ of Covid-19 lockdown rules, but no action will be taken – UK police

Baying reporters have been camped outside Cummings’s London home since the scandal unfolded, but Australian rugby league fans have reacted in a typically more relaxed way to the situation, by taking advantage of the NRL’s ‘fan in the stand’ initiative.

Supporters are invited to pay $22 to ‘take their seat’ during games behind closed doors by sending their picture into the club to be scanned onto a fan.

Whoever did this… 😂Dominic Cummings at the NRL over in Australia – what #lockdown rules? pic.twitter.com/3Z03ApJI31

NRL launches ‘fan in the stand’ initiative where supporters pay $22 to ‘take their seat’ during games behind closed doors. 👀 Good to see Dominic Cummings testing his eye sight in Parramatta… pic.twitter.com/cQJghzTWUk

Just as Cummings allegedly slipped through the net to make his getaway to Durham and the now infamous Barnard Castle, his image slipped through the less-than eagle-eyed club workers’s guard and was printed onto a virtual fan, which was in turn caught on TV.

“Good to see Dominic Cummings testing his eyesight in Parramatta…” one local journalist quipped. “Dominic Cummings has now travelled to Australia to watch a NRL game… One rule for them and another for us,” another social media user joked.

“He needed to know if he was safe enough to fly, before he did a round the world trip!” another replied.

Dominic Cummings has now travelled to Australia to watch a NRL game… One rule for them and another for us 😅 pic.twitter.com/M8CdCYTEbs

He needed to know if he was safe enough to fly, before he did a round the world trip🤣🤣

On the pitch, full back James Tedesco was the star of the match for the Roosters, who ran for 267 metres, had 10 tackle busts, two line breaks, and scored a try in the victory, according to Fox Sports Lab.

The ‘virtual fans’ initiative was first implemented by savvy Belarusian Vysshaya Liga team Dinamo Minsk in an attempt to inject some atmosphere amid dwindling crowds due to the outbreak of coronavirus.

Dinamo offered fans the chance to ‘attend’ a match by having their likeness stuck on a cardboard cutout wearing a random team jersey as well as other perks including a virtual tour of the ground, match ticket and scarf, all for 67 Belarusian rubles ($27/£21).

A number of other sports teams quickly followed suit, including Bundesliga side Borussia Monchengladbach. Things were upped a notch when in South Korea, football team FC Seoul were forced to apologize after using sex dolls in the stands instead of fans. (RT)