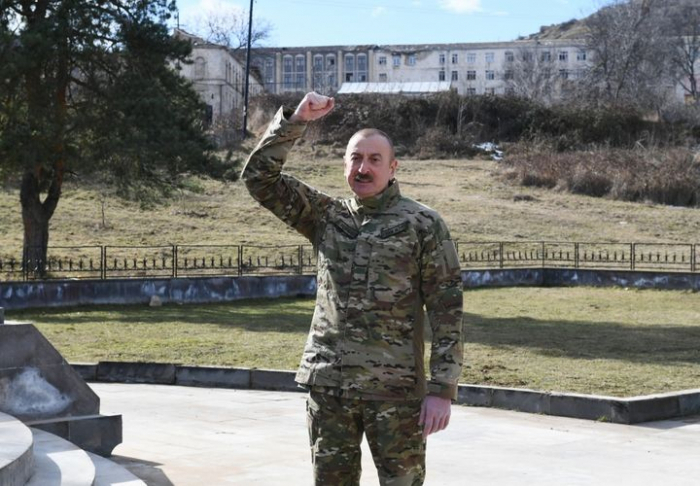 “Speaking at the inauguration of the magnificent State Flag Square in Baku, I said that the day will come when the Azerbaijani flag will be raised in the occupied territories, including Shusha. Here it is today. I remember that some representatives of the Armenian separatist regime said at the time that the Azerbaijani flag could be raised in Shusha only if Azerbaijan recognized the “Nagorno-Karabakh Republic” and Azerbaijan opened its embassy in Nagorno-Karabakh. See, how disgusting and arrogant expressions have been used. Now they sit like mice and put their tongues in their stomachs. ”

President Ilham Aliyev made these remarks during his meeting with servicemen in Shusha.

The head of the state said that they could not say a word: “We have come here as winners. We raised the flag, the Azerbaijani flag is flying in all the liberated lands. We have come by fighting. Nobody gave us these lands. No negotiations were of any importance. We saw that we must liberate our lands on our own, and we have done so. We have proved our strength to the whole world, we have crushed the head of the enemy. We forced the enemy to kneel before us and sign the act of capitulation. That’s what happened, and the humiliating act of capitulation will remain in history forever. The whole world is talking about our victory. Leading media outlets around the world write about Azerbaijan’s brilliant victory and prepare reportages. Now analytical articles are being published and books will be written.”